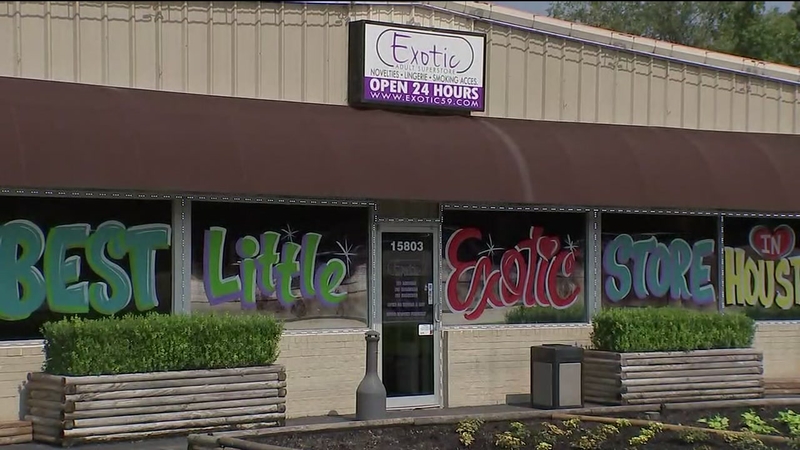 Authorities are looking for the suspects in a takeover-style robbery at an adult bookstore in northeast Harris County, where police say one of them raped an employee.

One of the suspects ran across the Eastex Freeway to avoid police. He was caught.

The robbery happened just before 3:00 a.m. Thursday at Exotic Adult Superstore off the Eastex Freeway north of the North Sam Houston Parkway.

Detectives say four men wearing ski masks came in and at least two of them were pointing guns. The security guard inside the store didn't have time to reach for his gun. A woman worker was behind the counter.

"They (the robbers) came in pretty calm, cool, collected. There was a security guard, but when they walked in with guns drawn they were able to get his gun and get him before he was able to react," said Sgt. Larry Gibson, a detective with Houston Police robbery division.

Investigators say one robber took the worker to the back of the store and raped her while the others emptied cash from the register.

The robbers drove to the store in a black Dodge pickup, stolen from Pearland. They left it in the parking lot, stealing the security guard's Toyota for the getaway car.

But the robbers didn't get very far.

The Toyota wrecked a couple miles down the road. All four suspects ran.

Around 3:20 a.m., Houston Transtar cameras captured one suspect running first across the five southbound lanes of the freeway at Aldine Mail Route.
He then sprinted across the northbound lanes. He was nearly hit by traffic at least twice.

A police sergeant and an officer ran after him on the freeway.

The chaos was heard in radio calls as police tried to catch up with him.

"Hey, somebody get up on the freeway. A wrecker driver says they have him on camera running south on the freeway," authorities said.

The officer eventually caught that suspect. Three others got away. Authorities say all are in their late teens or early twenties.

Police chase on Eastex Fwy ends with one person arrested. Unconfirmed reports — this started at Exotic Adult Superstore off 59, where police returned to take report. That’s where we took this video. #abc13 #breaking pic.twitter.com/tPETENQv0l