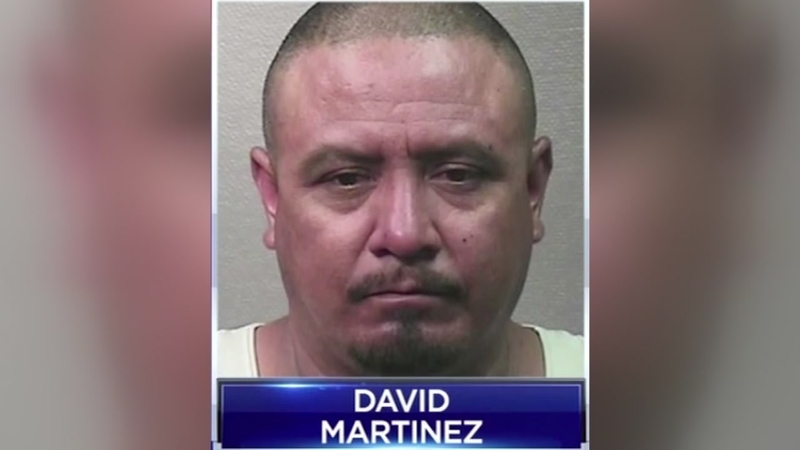 HOUSTON, Texas (KTRK) -- Houston police say a man suspected of assaulting his wife kicked two officers who tried to arrest him, sending one to the hospital.

Early Tuesday morning, police say David Martinez was outside his southeast Houston apartment, apparently drinking. Police say Martinez was arguing with his wife, then hit her. She called 911.

When police arrived to the scene, the couple was inside their apartment, and police say Martinez would not let his wife open the door.

"I heard loud banging and yelling, and the cops were bashing on the door with a flashlight, the man inside was screaming from inside," a neighbor who didn't want to be identified told Eyewitness News.

"It went on for a while and I guess the woman tried to open the door, and there was one cop, he made his way inside the house. There's a lot of scuffling or whatever, all you heard was a Taser just pop," the neighbor said.

Martinez allegedly caused internal injuries to the female officer, and she had to go to the hospital for treatment.

"The most dangerous time is when that officer is moving in to actually make that arrest," said Joe Gamaldi, the president of the Houston Police Officers Union.

"The reality of the situation sets in for the suspect, and they suddenly think, 'I'd rather fight it out than go with these officers,' and it's just ridiculous. In this case, we got a dirt bag who absolutely assaults two of our officers because he didn't want to go to jail," Gamaldi said.

Police say the female officer will be alright. Martinez is now facing two counts of assaulting an officer and one count of assaulting his wife.

"A man who hits on a woman deserves what's coming to him," said the neighbor.