Watch Malia and Sasha Obama grow up before your eyes 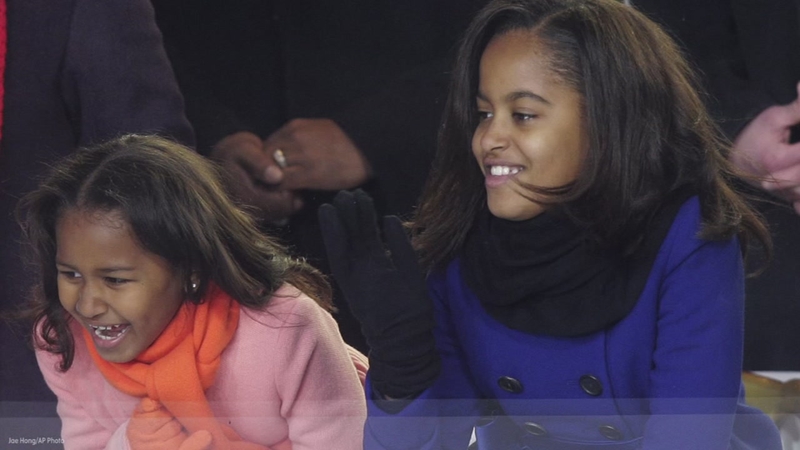 Sasha and Malia Obama through the years

Malia and Sasha Obama have grown up quite a bit from the little girls who first moved into the White House eight years ago.

When their father, President Barack Obama, was elected in 2008, Malia was just 10 years old and Sasha was seven. At the time, George W. Bush's daughters Jenna and Barbara wrote a letter to the younger girls describing what it's like growing up in the White House and encouraging them to make the most of their magical new home.

President Obama recently reflected to ABC News about his daughters' time in the White House, saying he had been apprehensive that they might develop an attitude. But he said that was not the case.

"All I can say is they have turned out to be terrific young women," he said. "They are sweet, kind, funny, smart, respectful people, and they treat everybody with respect."

The president also said that he appreciated being able to travel between his office and his home in less than a minute, and that having his family so close made the White House feel more like home.

Malia, now 18, is taking a gap year before starting at Harvard University in the fall, and Sasha, 15, will be moving into a new home with her parents in Washington, D.C. where she will stay to finish high school.

Last week, the Bush sisters wrote another letter, assuring the Obama sisters, "You will be writing the story of your lives, beyond the shadow of your famous parents, yet you will always carry with you the experiences of the past eight years."

They continued, "You won't have the weight of the world on your young shoulders anymore. Explore your passions. Learn who you are. Make mistakes - you are allowed to."

As the first daughters prepare to say goodbye to the place they've called home since they were kids, take a look back at Sasha and Malia through the years in the video above.
Related topics:
politicspresidential inaugurationphotosmichelle obamau.s. & worldbarack obamaobama family
Copyright © 2022 KTRK-TV. All Rights Reserved.
PRESIDENTIAL INAUGURATION
'Nailed it:' 4-year-olds recreated Obama Inauguration outfits
Poet Amanda Gorman says she was tailed by guard who thought of her as 'threat'
Michelle Obama speaks to 'GMA' in first post-inauguration interview
Inauguration Day in one frame: NatGeo's striking time-lapse
TOP STORIES
Daylight shows home destroyed after standoff with shooting suspect
What we know about man accused of shooting 3 HPD officers
5 people charged in connection with Pct. 5 corporal's murder
Driver dies after slamming into 18-wheeler's trailer on US-59
Woman shot in the shoulder during robbery set up in SW Houston
Prepare for a major closure at I-69 and 610 West Loop this weekend
Officers escort body of corporal killed in ambush to funeral home
Show More
Clouds clearing today, sunny through the weekend with rain next week
ABC13 obtains HPD scanner traffic of chase that led to shootout
'Tiger King' Joe Exotic resentenced to 21 years in prison
10 injured in PA bridge collapse; human chain formed to help
Bayou Bistro and Bar owner killed in Texas City shooting
More TOP STORIES News