Long road to recovery for Dickinson after Hurricane Harvey 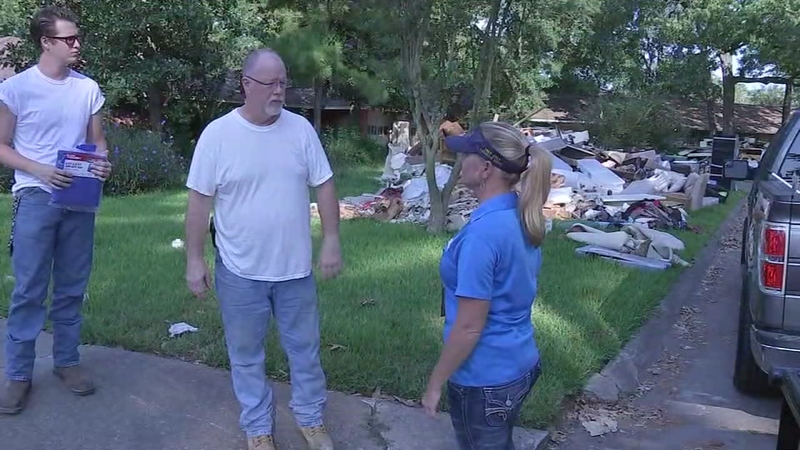 Dickinson is one of the hardest hit cities in the Houston area. The local police department reports more than 7,000 homes and 88 businesses were seriously damaged. In this small town of 20,000 people, at least half the people were affected.

One of those places to get that help is at the Dickinson donation distribution center. For the last three weeks it has been located at the Dickinson Railroad Museum, before moving to the volunteer fire department at Dockrell and FM 517. People can pick up everything from food and water to diapers and cleaning supplies.

"It means a lot. It means a lot for us and it's going to help us get back on our feet," said Jessica Barrera, from the front passenger seat of her SUV. Volunteers load water and dog food into her van.


Angela Forbes, Dickinson's director of donations, is running the operation. She estimates, since the storm, at least 10,000 people have come through this line. Remember, that's about half of Dickinson's population.

"I just feel like I've got to help. I've got to help," Forbes said. "So many people are my dear friends and I love this community and to see it at one of its lowest points, it just breaks my heart."

Dickinson is one of the hardest hit cities in the Houston area. The local police department reports more than 7,000 homes and 88 businesses were seriously damaged.

Though thousands of people have driven through this line, Forbes estimates there are still hundreds who need help and won't ask for it.

"So many people, they have so much pride. They don't want to come to these things," she said.

Which is why, every day, Forbes and her husband load up a flatbed with pallets of water, boxes of food and buckets of bleach, get in their truck, and drive to a new neighborhood.

"Do you need anything? We have all types of supplies on board," Forbes asked Charles White in front of his home. The debris pile in front of White's house is easily six feet tall.

"The only thing we need right now is bedding," White said.

White and his family are sleeping in their backyard, in a tent, on air mattresses. They've spent the last week gutting their home.

"Okay, I'll get some sheets sent over to you right away," Forbes said, instructing her husband to write down the White's address. "I'll see you soon, in a little while."

However Forbes can help, she does.

A few homes down, Marcel Radder takes a couple cases of water. He's been so busy cleaning his mom's house, he hasn't had a chance to ask for help.

"I'm so happy there's people out here that care and that are willing to supply and help us out," Radder said.


His biggest fear is that Dickinson will be forgotten.

"Every time I turn the news on it's Houston and it's kind of like Dickinson was being left out. Dickinson got hit pretty hard," Radder said. "You can't just say Houston. You have to say Galveston County, Houston, Lake Jackson--everybody got hit in this. It's everybody that's going to need the help."

It will be months, maybe years, before Dickinson is back to normal. Forbes wants her neighbors to know that the city won't stop until everyone gets the help they need.

If you'd like to donate to the people of Dickinson, Forbes says they are in desperate need of cleaning supplies. You can drop off donations at the Dickinson volunteer fire department on Dockrell at FM 517. They're open 9am until 1pm, then 3pm until 7pm, through Friday.