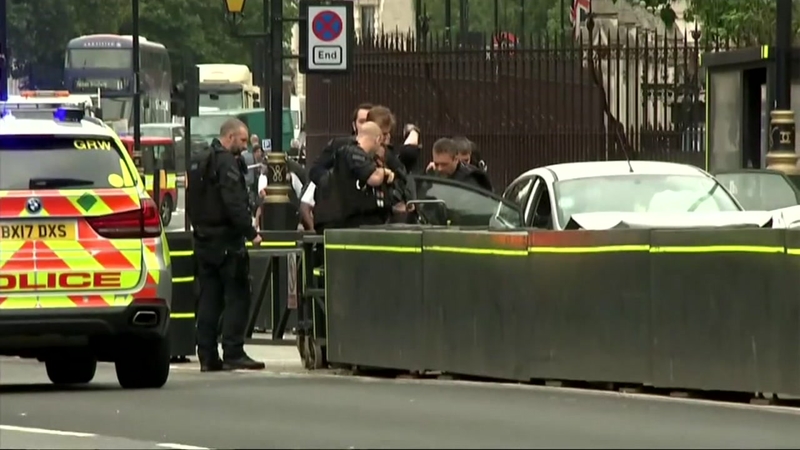 LONDON -- London's Metropolitan Police say that they are treating the crash outside of Parliament as a terrorist incident.

A motorist crashed into pedestrians and cyclists near the Houses of Parliament in London on Tuesday, heightening tensions in a city that has seen four vehicle-based terror attacks in less than 18 months.

Two people were hurt, but authorities said none of the injuries were life-threatening.

Armed police swooped into the area, arresting the driver and cordoning off streets surrounding the heart of Britain's government. Police appealed to the public to stay away, and the Westminster Tube station was closed.

Images from Sky News and social media showed a man in a puffy black jacket who was surrounded by police and led away in handcuffs from a silver car.

Authorities said in a statement Tuesday that the man in his 20s was arrested on suspicion of terrorist offenses.

Eyewitnesses described the car as being driven at high speed before hitting carriers. Several suggested it was deliberate.

"The car drove at speed into the barriers outside the House of Lords. There was a loud bang from the collision and a bit of smoke," Ewelina Ochab told The Associated Press. "The driver did not get out. The guards started screaming to people to move away."

"It looked deliberate. It didn't look like an accident," he said. "How do you do that by accident? It was a loud bang."

The area was the site of a terror attack in March 2017, when Khalid Masood ploughed a car into crowds on Westminster Bridge, killing four people. Masood abandoned his car and then stabbed and killed a police officer before being shot dead in a courtyard outside Parliament.
Report a correction or typo
Related topics:
car crashterrorismu.s. & worldterror attacklondoncrash
Copyright © 2022 by The Associated Press. All Rights Reserved.
U.S. & WORLD
CDC advisory panel greenlights booster shots for children ages 5 to 11
NY high court to determine if Bronx Zoo elephant is a person
2 years into COVID-19, some remain in complete isolation
FTC warns about baby formula scams on the rise amid shortage
TOP STORIES
Dad in murder-suicide forced daughter under water in tub, records show
Harris County DA demands Hidalgo stop 'daily public misstatements'
Houston police working 2 separate shooting scenes across city
$25K reward offered to find 14-year-old's 'vicious killer'
CDC advisory panel greenlights booster shots for children ages 5 to 11
Rainfall projections continue to increase for next week
2 years into COVID-19, some remain in complete isolation
Show More
Rihanna and A$AP Rocky welcome their first child
Fertitta Family College of Medicine named after $50M donation to UH
Here are the top 14 things to do in Houston this weekend
New 53-mile stretch of Grand Parkway opens in both directions
Single mom left stranded after car was stolen from her home
More TOP STORIES News