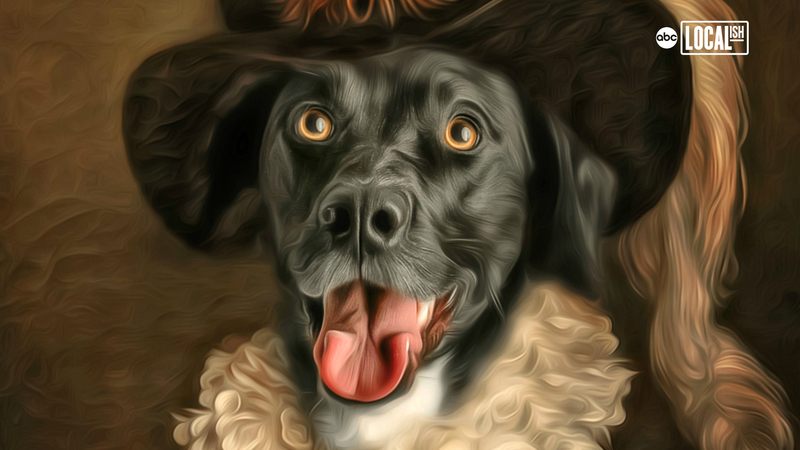 BERKELEY HEIGHTS, New Jersey -- When Jennifer Polito-Mount decided to composite a digital portrait of her dogs, she didn't think much of it until she posted it on her Facebook page. It was the overwhelming reaction from her family and friends that sparked an idea in her head.

She decided to start her own fundraiser on Facebook, where people could donate money to her local dog shelter, Home for Good Dog Rescue, and in return -- receive a digital portrait of their pets.

"I thought 'Hey, you know what let's just throw this out there," said Polito-Mount, referring to her digital portraits. "'Let's just see if anyone else would be interested in it.' And it just took off."

The digital composites start off as a sales transaction between Polito-Mount and photographer, Tara Mapes, who facilitate the oil images. Then, Polito-Mount uses her own photography skills to insert the heads of the animals onto the images.

"Once someone goes into the Facebook page and donate, then they send me an email and they can send me a picture from just their phones," said Polito-Mount. "I then place that onto the body of the animal and I send it over to my Photoshop. That's where I create a digital painting."

This cancelation was a devastating loss for the non-profit organization that heavily depends on donations to rehabilitate their animals, many of which they rescue from kill shelters in the South.

According to Home for Good Rescue's Marketing Coordinator, Thomas White, the average cost for medical treatment per dog is $875.

"These very beautiful oil style images...people went crazy for them," said White. "I think she originally set her goal at $500, and she got over seven times that amount in donations."

The shelter has already received almost $4,000 by the beginning of August on their Facebook page, which Polito-Mount said will go directly to dogs who are suffering from heartworm disease.

As much as Polito-Mount was grateful that her fundraiser has been a success, she mentioned that nothing would make her happier than seeing more people adopting dogs instead of purchasing them from stores.

"I think it is very important for people to understand that not all rescue dogs are damaged," said Polito-Mount. "A lot of people will say to me, 'Well, I don't want a rescue right now because I have little kids and I don't know where that dog came from'. It all depends on the dog. You can buy a purebred dog and spend $5,000... that dog will be aggressive. So, I hope people really open their eyes."