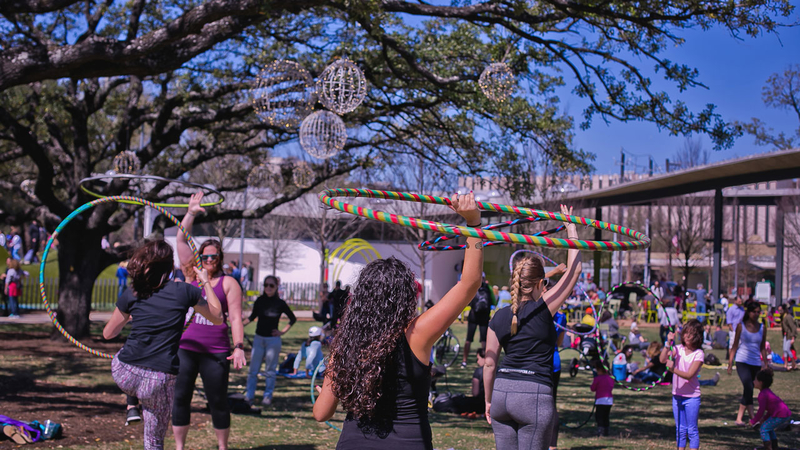 HOUSTON, Texas (KTRK) -- Tucked away between high-rise office buildings and apartment complexes, the redesigned Levy Park is quickly becoming a cornerstone of the community in Upper Kirby.

A 1941 land donation from Houston philanthropist Leon Levy provided the space for the original 5.2-acre park, which re-opened this February after a two-year renovation process that quite literally rebuilt the green space from the ground up.

Now, it's nearly impossible to stop by the park when there isn't something going on. From scheduled fitness classes and musical performances to a booming dog park and children's play area, Levy Park is teeming with activity seven days a week -- and the community is responding. The park hosts an estimated 10,000 visitors weekly.


ABC13 caught up with Levy Park director Doug Overman to learn more about the wide range of features in the park, which drew inspiration from none other than Bryant Park in New York City.

The park's performance pavilion, designed by local architect Natalye Appel, plays host to free live programming designed for families and park visitors of all ages. Although the park is still curating its live music series, the pavilion will eventually host more than a dozen events per week. The park will present a Saturday night live music series featuring six acts each week, a Friday night music series with jazz and acoustic musicians and a family film series.

"It's a stage and a venue that works really well for productions and performances of many different sizes and scales and types," Overman said.

Park visitors are also invited to participate in the action at free group fitness classes under the pavilion, ranging from drumming-inspired Pound classes to boot camps and Tai Chai. There are also daily yoga classes, and the park will even provide mats for yogis on the go.

Both fitness classes and live performances are organized in concert with Houston-area cultural institutions and fitness studios like Joy Yoga Center, Prelude Family Music, METdance and the Houston Public Library.

CHILDREN'S PLAY AREA
The children's play area at Levy Park is anything but what you'd expect -- the playground area is an expertly designed, twenty first century take on park equipment.

"They're not your classic, traditional playground features -- you won't find a swing set, but you'll find turning sculptures and dance chimes," Overman said.

A three-towered fountain sculpture at the center of the area offers young park visitors refreshing relief from the Texas summer heat. A bright green arcing boardwalk overlooks the play area with a panoramic view of the east and west ends of the property. The ADA-accessible boardwalk accommodates strollers and wheelchairs.

Of course, not all children love playgrounds -- even ultra-modern play areas. Several carts in the park offer board games, art supplies, books and newspapers for parents and children alike.

DOG PARK
Four-legged friends are also welcome in the park, which houses a dog park with Fido's name written all over it. The park is divided into areas for small and large dogs ("It keeps the small dogs from nipping at the larger dogs," Overman quipped), both featuring turf-covered mounds for canine climbing, water features and benches for owners to take a load off.

FOOD & DRINK
Levy Park will soon host three different foodservice venues, including one that pays homage to the history of Upper Kirby.

Longtime residents will remember the iconic red, double-decker bus that used to run through Upper Kirby back in the day. Officials have re-purchased that exact bus and will re-introduce it as a permanent restaurant in the park, offering coffee and pastries in the morning and beer and wine on tap in the evenings.

Additionally, a 6,500-square-foot restaurant is under construction in the southeast corner of the park, and a kiosk will serve smoked meats, small plates and alcohol on the park's west side.

Renowned Fort Worth chef Tim Love will helm the park's eateries, bringing in inspiration from his Wooded Smokehouse restaurant along the Trinity River.

"When you're eating outside his restaurant, you feel like you're right on the river," Overman said. "We hope the people who are eating in his restaurant here will feel like they're that connected to the park."

You don't have to wait until the three new venues are open to get your nom on in the park, though -- food trucks are on hand from 11 a.m. to 8 p.m. on Fridays, Saturdays and Sundays.


COMMUNITY GARDEN
You can't have a green space without greenery, and Levy Park is bursting at the seams with lush vegetation.

The park features 24 community gardens, all tended by volunteer gardeners. Many of them cared for gardens pre-renovation, opting to take a two-year break during the construction period before returning to their new and improved digs.

During a recent visit, the gardens were gushing with tomato, watermelon, pepper, squash and berry plants.

"We ask people not to come out and pick their own," Overman warned. "Wait until the gardeners are there and ask for permission."

The new Levy Park is also home to 30 live oak trees from the original park, nine of which had to be moved to accommodate the new park design -- an 'extraordinary process,' according to Overman. OJB Landscape Architecture, the firm that designed the park, brought in another 180 trees to offer visitors shady relief from the sun.

PARKING INFORMATION
Located at 3801 Eastside, the park sits within walking distance of numerous apartment complexes in Upper Kirby, but street parking is available on Eastside Street and Wakeforst Avenue for those who choose to drive. Visitors can also park in the Kirby Grove office building at the corner of Richmond and Wakeforest.

ECONOMIC MODEL
Interestingly, two recently developed buildings that sit adjacent to the park -- the Kirby Grove office building and the Avenue Grove apartment complex -- sit on land owned by the Upper Kirby Redevelopment Authority. Property developer Midway pays a ground lease to Upper Kirby, and a portion of that funding then flows into Levy Park's budget and pays for the park's physical infrastructure and free programming.