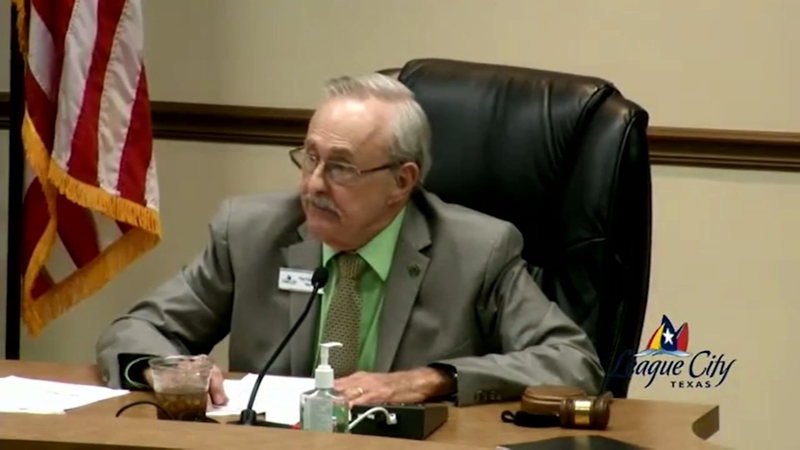 LEAGUE CITY, Texas (KTRK) -- If we know anything about League City Mayor Pat Hallisey, it's that he is a fighter. His latest battle is COVID-19 and it's a tough one.

In good spirits and healthy two weeks ago, he presided over the city council meeting. He also attended a Veteran's Day ceremony and a groundbreaking at the College of the Mainland. But a few days later, on Nov. 16, Hallisey felt sick and tested positive for coronavirus. All staff members who were with him have tested negative. He wore masks at the events but took off his mask to conduct the council meeting. He was hospitalized last week, and because of low oxygen, transferred to intensive care.

"Having a nurse dedicated and assigned to you one on one, they felt it was better to put him into ICU to make sure that he's keeping that oxygen on and it's staying consistent," said city spokesperson Sarah Greer Osborne.

There is unique concern for the mayor because of his preexisting conditions. He had pneumonia last year, and you may remember that in late 2017, he suffered a heart attack after Hurricane Harvey. Lack of blood flow nearly killed him and he lost a leg, but doctors saved him. His vascular surgeon told me then, much of the credit went to the mayor.

"I think what made the difference was his constitution and his determination to get well, to stay alive," Dr. Hazim Safi told ABC13 in November 2017.

Hallisey's wife Janice has also tested positive. She is at home, wishing she could be at her husband's side. The community is wishing both of them a quick and full recovery.

There is a city council meeting tomorrow night. We're told the mayor was on the phone today with staff, regretting he cannot preside over the meeting himself.