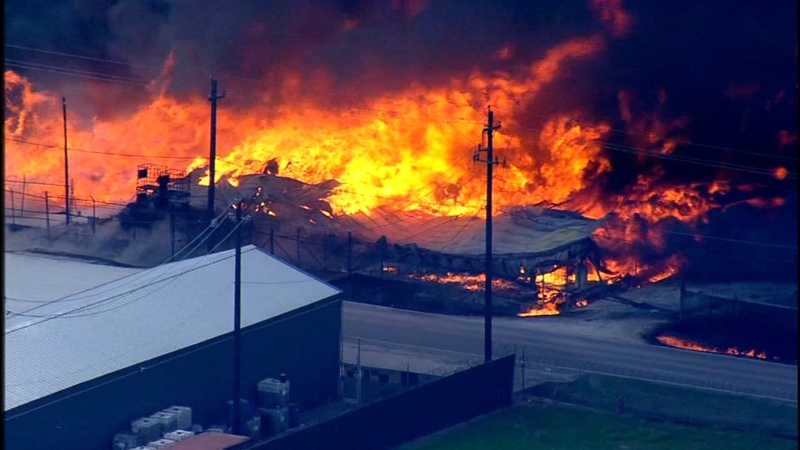 CHANNELVIEW, Texas (KTRK) -- K-Solv, the company whose Channelview transit facility burned in a massive fire a week ago, is disputing claims made by a trucker in a lawsuit against them, saying the man declined first-responding medical attention while evacuating the area.

Antonio Alvarez filed a lawsuit against K-Solv for "substantial trauma and injuries" sustained when he tried to escape the flames from the April 7 inferno.

Alvarez's lawyers said Alvarez, at the time of the fire, was at the facility to make a drop-off and pick up a product while working his trucker duties. When the fire went off, Alvarez ran and stumbled to the ground as he was trying to get away, according to attorneys.

"As sequential explosions rang out, Mr. Alvarez made it to a high fence that he and other facility contractors squeezed and pressed against, while trying to scale it to escape the facility," read a statement issued by Alvarez's attorneys.

Alvarez and other workers say they found a ladder and climbed over the fence.

"Mr. Alvarez was able to escape the facility and successfully board the vessel but not without sustaining substantial injuries and trauma as a result of the chaos and destruction following the fire," the statement continued.

Alvarez was reportedly hospitalized shortly after and was treated for injuries to his lungs, neck, shoulders, and back.

On Wednesday, a day after the lawsuit went public, K-Solv responded to Alvarez's lawsuit, which didn't immediately give a monetary amount being sought from the company.

In a statement, K-Solv, while reviewing its own cameras at the site, said initial reports revealed Alvarez wasn't located within the warehouse fire vicinity and was actually off site sleeping in the cab of his truck.

It wasn't until the fire erupted that an employee woke him up to exit the premises, according to K-Solv's statement.

K-Solv went on to state Alvarez was escorted to the docks to board an evacuation vessel, all while trying to record the fire with his phone.

"The claimant departed the facility safely via vessel to the safest rally point. Once the vessel docked, first responders were on standby to provide any aid required. Employees asked the driver multiple times if he had any injuries or required medical assistance. The driver declined all medical services available and left on his own accord," K-Solv's statement read, in part.

According to the company, it has "response protocols in place to aid employees and visitors in a safe prompt departure of the facility, if needed."

"K-Solv will continue our investigations into these claims and respond accordingly," it concluded.