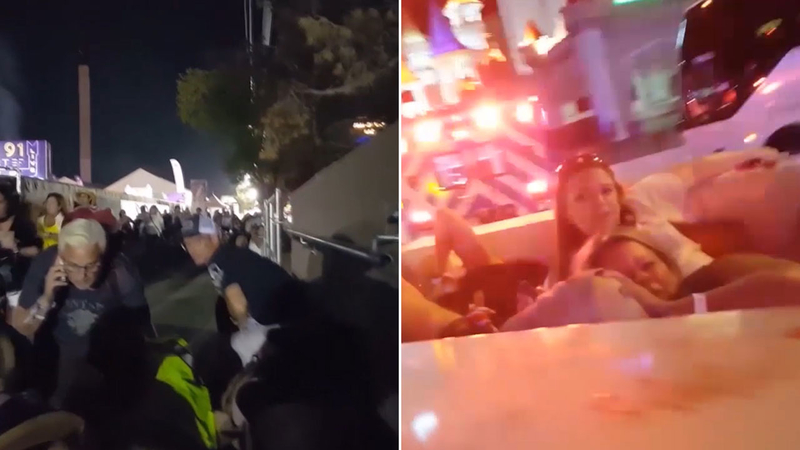 LAS VEGAS -- Nevada man Raymond Page was just doing his job on Sunday night, adjusting traffic signals, when the shots rang out. He pulled out his phone to record for evidence and started walking toward the gunfire.

At the end of the dramatic footage, Page would go on to transport five wounded people to safety in his pick-up truck. But in the moments after the first shots rang out, he just wanted to stay and help, even if that meant putting himself in danger.

"It was almost like it was a movie, as it was happening," he told the Las Vegas Review-Journal.

Anxious concert-goers can be seen exiting the venue, some climbing over the fence in a panic, some dazed and moving slowly, seemingly unaware that the noise they are hearing is gunfire.

"Run! Don't walk!" and "Keep your head down!" Page and the police officers scream multiple times, urging confused people in the direction away from gunfire.

When the shots ring out, they urge people to stay down. In between rounds, they scream for them to run.

At one point Page approaches a group that is huddled against a barrier, telling them, "You need to run that way. It'd be a lot safer." They listen to him.

Later, a man approaches Page and says he's been shot in the arm.

"I need an ambulance. There's nobody here to help us," the man said.

Page takes him to a safe place and leaves him with a man who says he's an off-duty police officer before telling them he's going to get a medic.

Later, he is filming from his car as he transports wounded people. He pulls up to an area with ambulances, telling an officer that he has five wounded people and climbing out to help move them.

He told the Journal that he stayed in the line of fire because he wanted to help the injured.

"I was kind of reacting to everything that was happening as it was happening," he said. "My biggest thing about what happened is that there's not a plan for getting injured people out if there's an active shooter."

The images he recorded and everything that happened after has been haunting him, he told the Journal.