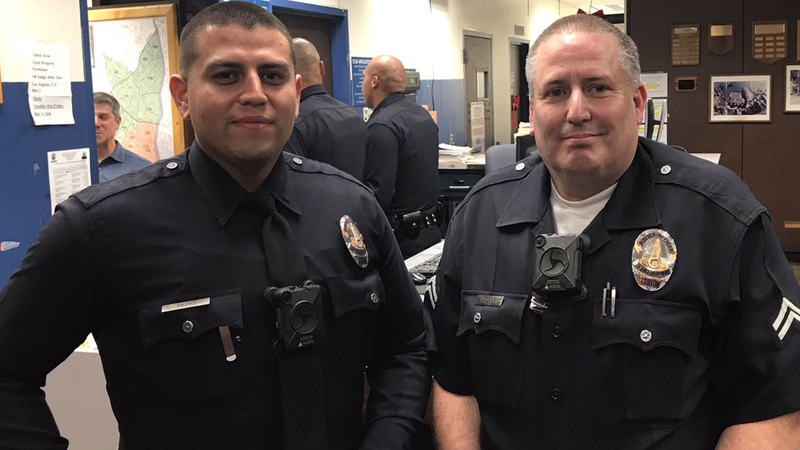 Officers from LAPD's Central Area were called to a Main Street building Monday afternoon for what initially came in as a woman screaming.

They arrived to the building, went up to the fifth floor and found a young woman who was indeed screaming - because she was pregnant and clearly in distress.

Her water had already broken.

"One of the officers started timing her contractions. He's like, 'Yeah she's having a baby,'" recalled Officer Clinton Popham.

Listen to the first hand account from #LAPD Officer Popham, including some of the police radio broadcasts, as he describes how @LAPDCentralArea officers delivered a special #Christmas baby girl pic.twitter.com/sUT3JtIv2e

Popham, a 19-year veteran of the force and his rookie partner, Officer Francisco Muro, jumped into action, with the assistance of four other officers at the scene.

First task was convincing the distressed woman to lay down, after she kept trying to stand back up.

With the right coaching, they were able to help the 25-year-old woman, Angel Johnson, through the birth.
"I told her you gotta push, you gotta push now," Popham said. "If you don't, something's going to happen to the baby. She did. She pushed real hard. The baby came straight out."

Neighbors brought blankets and the healthy baby girl was wrapped up and brought to her mother as paramedics took her to the hospital for recovery.

Police officers do get some basic training in how to deliver a baby when they're at the academy. But they don't often get to put it into practice.

And Popham is a father of four so he's witnessed births before, but he's never been such a direct participant.

As for Muro, who's been on the force only six months, it was quite the experience.

"I definitely want to be a dad, but it's a great day to be an LA officer," Muro said.