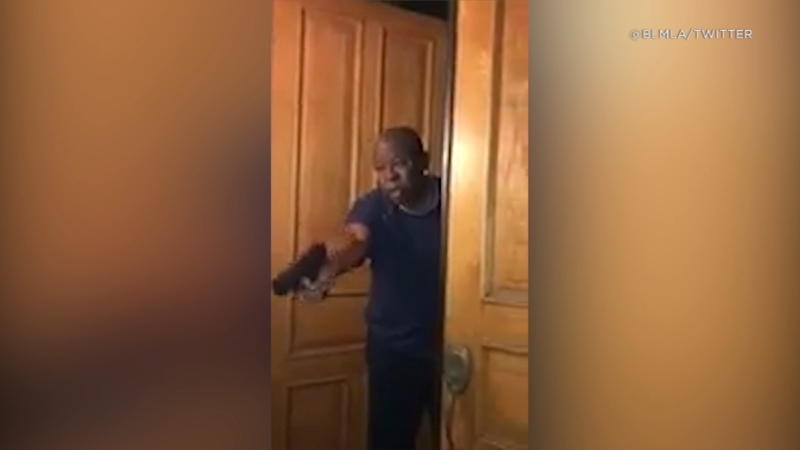 GRANADA HILLS, Calif. -- The husband of the Los Angeles district attorney is accused of pulling a gun on Black Lives Matter activists in a video captured outside of their California home Monday morning, just one day before Tuesday's primary.

A man - who protesters identified as David Lacey, the husband of L.A.'s chief prosecutor Jackie Lacey - wielded what appeared to be a handgun while threatening to shoot the protesters if they did not leave the property.

The disturbing video was tweeted Monday morning by Melina Abdullah, a Black Lives Matter organizer. The footage was also tweeted by Jasmyne Cannick, a candidate for Los Angeles County Central Committee, which is composed of volunteers for the Los Angeles County Democratic Party.

Cannick said in a tweet that the group was protesting Lacey in front of her house after she allegedly failed to meet with Black Lives Matter. During the protest, her husband opened the door and threatened to shoot Abdullah, who is heard speaking off-camera.

"Can you tell Jackie Lacey that we're here?" Abdullah said.

"I don't care who you are," the man said while lowering the gun. "Get off of my porch! Right now!"

The man identified as David Lacey then said he was calling the police as he closed the door.

Los Angeles police responded to the home. Authorities say no arrests were made, but an investigation is ongoing.

Lacey is up for a third term as L.A.'s chief prosecutor in a tough battle against former San Francisco DA George Gascón and former LA County public defender Rachel Rossi. However, heading into the election, Rossi is being outspent by the top two contenders, who also boast more influential endorsements.

Lacey has faced heat for the racial disparity in county jails, high incarceration rates and her position on the death penalty despite Gov. Gavin Newsom's moratorium on the punishment.

A June 2019 report by the ACLU denounced the high rate of death sentences in L.A. County and highlighted that the 22 defendants sentenced under Lacey are people of color, although white defendants were eligible for the punishment. A majority of voters countywide have opposed the death penalty but statewide they've supported it.

One of her fiercest opponents is Black Lives Matter L.A.

Members disrupted a debate in late January, chanting "Jackie Lacey must go" during Lacey's response to the incarceration rate of people of color.. The group - including relatives of those killed by police - has protested outside Lacey's office weekly for more than two years.

ABC7 reached out to Jackie Lacey for a statement on the incident but has not heard back.