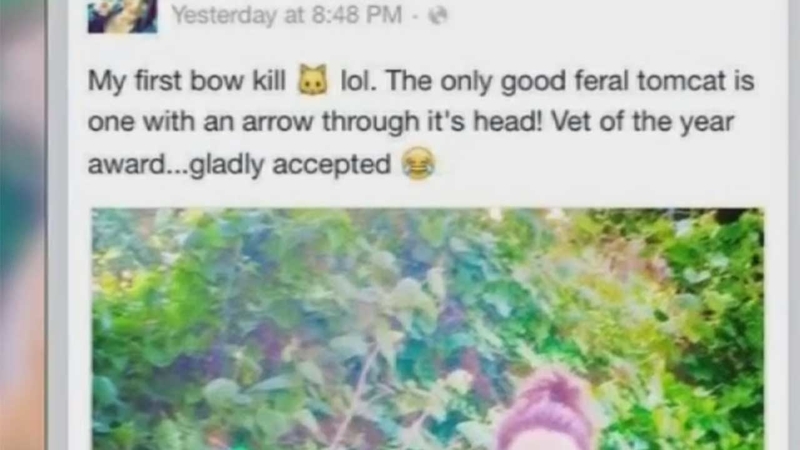 Fired vet who killed cat with arrow has license suspended

AUSTIN, Texas (KTRK) -- A Texas court has rejected appeals from an Austin veterinarian who lost her license for a year after shooting an arrow through the head of a cat.

Kristen Lindsey's 2015 social media post bragging about the killing sparked outrage among animal rights activists, and led to a state board decision that included a four-year probationary period to follow a one-year suspension of her license.

Lindsey appealed the Texas Board of Veterinary Medical Examiners's decision in the Third Court of Appeals, arguing the actions she took "had nothing to do with the practice of veterinary medicine."

The court, however, upheld the state board's decision, which legally allowed her to resume her veterinary practice in October 2017 under the supervision of a board-approved veterinarian.

The TBVME ordered in 2016 that the supervising veterinarian would submit quarterly reports to the board on Lindsey's progress.

The court also ordered that Lindsey pay all costs related to the appeals, both in the trial court and court of appeals.

"We're pleased that the courts still see Kristen Lindsey's actions as deserving of punishment, however, a one-year suspension is grossly inadequate for a veterinarian who gained such pleasure from the torture of a cat," said Becky Robinson, president and founder of Alley Cat Allies. "Kristen Lindsey should never be trusted to practice veterinary medicine again."