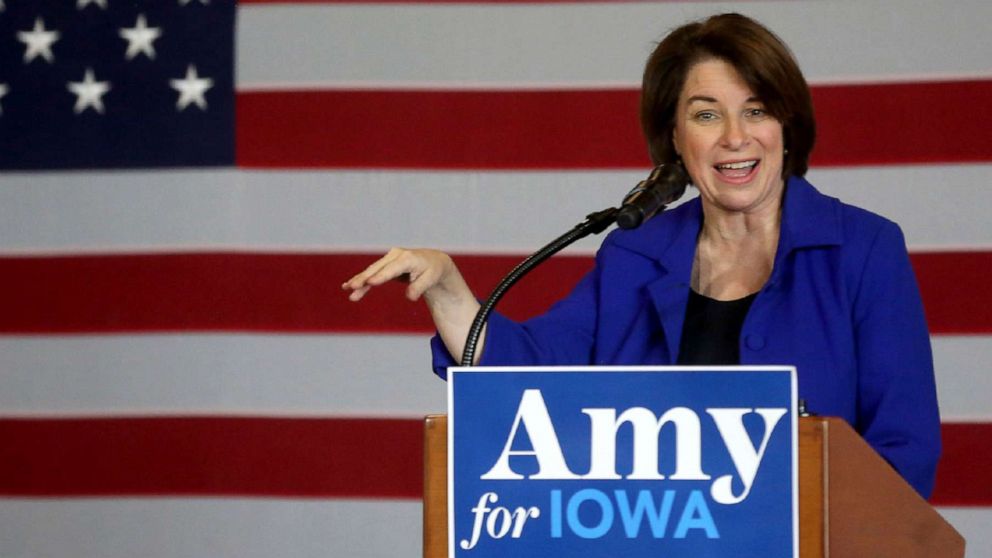 DES MOINES, Iowa -- Democratic presidential candidate Sen. Amy Klobuchar, D-Minn., will be taking on one of the most ambitious Iowa visits of the election cycle Friday when she launches a three-day 27-county bus tour through the Hawkeye state.

The bus tour comes just as the uncertainty of the Senate impeachment trial rattles Capitol Hill, and questions of electability plague a campaign investing most of its resources in Iowa in the hope of a strong performance in the caucus state on Feb. 3.

"Amy is someone who works incredibly hard. And that is why I can put together a bus tour that is 27 counties in what is basically three days," Lauren Dillon, the Klobuchar campaign Iowa state director said. Klobuchar will have visited 96 of the 99 Iowa counties by Dec. 23.

Klobuchar's bus tour comes on the heels of the campaign announcing a rapid expansion of its Iowa operations, including ramping up to 70 staffers based in the state and opening up to 18 offices across Iowa with the aim of opening 20 total offices by the end of the year.

The Klobuchar campaign says her Iowa bus tour will function as a way to continue riding the momentum in a state in which just last month she was polling in at her highest numbers yet, 6% and in fifth place overall, according to a Des Moines Register/CNN poll released Nov. 16.

Rachel Paine Caufield, a professor in the political science department at Drake University, says the idea of visiting counties outside of the urban centers isn't anything new to Iowa presidential elections, especially among moderate candidates.

"I think these more moderate candidates they're looking at some of these smaller towns outside of the population areas and they're saying, hey, if we spend some time there and really motivate activists there, and excite them about our campaign, then we can gain support there, and in the system as it is set up those delegates matter on caucus night," Caufield said.

However, even with all the heavy investment in the first nominating state, Klobuchar still faces one of the biggest challenges of her campaign: how does she continue showing up in Iowa when she has a day job as a sitting senator during a historic impeachment trial? The campaign says they are still figuring it out.

With very little known as to how the impeachment trial of President Donald Trump will shape out if and when it reaches the Senate, the Klobuchar campaign says they are considering all options.

"We will have some creative ways I'm sure to make sure that people are hearing from her. Even if she's not physically able to be in Iowa," Dillon said.

As a candidate with many endorsements from local and state Iowa legislators, and with Minnesota just north of Iowa, those surrogates or family members like Klobuchar's husband or daughter could "speak on Amy's behalf," according to Dillon.

Debbie Walsh, director of the Center for American Women and Politics at Rutgers University, said Klobuchar's absence in early primary states like Iowa could work to the candidate's advantage.

"Democratic voters and caucus-goers are going to feel pretty strongly that she's there in Washington doing that work," Walsh said, adding that those voters are "the most adamant of Democrats in favor of impeachment."

Earlier this month, Klobuchar told ABC News in Iowa that with an impeachment trial and an ongoing presidential campaign, she would be able to do both, one way or another.

"It is my constitutional duty," Klobuchar said. "I will find a way because I am really good at doing two things at once -- I'm a mom. And that means doing my duty for the country by being at that trial but also going back and forth, especially to the early states."

Which way she'll vote during that impeachment trial still remains a mystery. For over a month now she's been saying in various ways that she wants to "look at all the evidence."

However, experts say Klobuchar's biggest obstacle may not be the impeachment trial keeping her from Iowa voters next month. Instead, her biggest challenge might be opposing moderate candidates whom Iowa voters perceive as more "electable."

One of Klobuchar's biggest sticking points state-to-state, and county-to-county is what she says is her "track record" of winning "every race, every place, every time, all the way back to elementary school," especially as a female candidate.

"Every single time I've won, not just with women, I've won big time with men," Klobuchar told a crowd in Des Moines earlier this month. "And I think there's this false perception that a women candidate isn't going to bring in male votes. You better check out my record because I have and I have been able to win in the hardest of districts."

Caufield said that while Klobuchar might lack the "history" a candidate like Biden might have with Iowa voters, and the "novelty" Buttigieg has as the first openly gay candidate, she's hearing more Iowa voters giving Klobuchar a "second look."

"Iowans are renowned for waiting until the final minutes to make up their mind," Caufield said. "So if you can get people to say that they're still looking at you, they're still paying attention to your campaign, that in and of itself is fairly significant achievement."

However, Walsh says that the impending Senate impeachment trial leaves Klobuchar in an even more vulnerable spot against those moderate opponents who won't be tied up in Washington, D.C. in the weeks leading up to the caucus night.