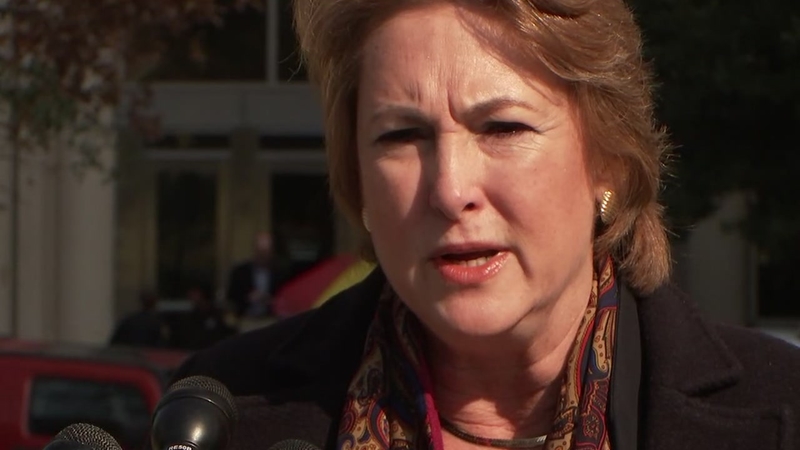 HOUSTON (KTRK) -- Harris County District Attorney Elect Kim Ogg discussed what she called a "sick plot" to scare people at a news conference this morning at the courthouse.

Ogg addressed the issues that have emerged, her plan of action, and her warning to those who would misuse the information of crime victims to wage alleged political retaliation.

"This lack of professionalism will not go unaddressed," Ogg said.

In a news release sent out Tuesday morning, Ogg is quoted saying, "In the last 48 hours I have become aware that some victims of crime and their families are being revictimized as part of some sick plot to scare people. ... The conduct I have witnessed in the last 24 hours coming out of the District Attorney's Office is unacceptable, irresponsible, and will be investigated after I take office on January 1, 2017."

Last week, Ogg notified 37 prosecutors that their contracts would not be renewed at the beginning of the year. Today, she alleged some of those who were dismissed are purposefully scarring crime victims families by calling them and suggesting their cases would be affected by the transition.

"It's the use of victims as pawns by disgruntled employees that shows not just a profound disrespect for other people but a lack of professionalism, that won't go unaddressed," said Ogg.

In an unusual move, Ogg singled out three prosecutors by name. They include Justin Keiter, Nick Socias, and Gretchen Flader. Socias was the prosecutor involved in the jailing of a rape victim, identified as "Jenny," which became a central campaign issue.

"It appears these prosecutors are involved in contacting victims and deliberately providing information that upsets them," said Ogg.

Renowned defense attorney Rusty Hardin refutes Ogg's assertions. Hardin, who represents Socias as part of fallout of from the jailing of a rape victim, says the ousted prosecutor simply replied to a family's email questions. Hardin showed Eyewitness News the email, which shows the family of a crime victim emailing Socias after an automated victim notification system alerted the family that the suspect had bonded out. In the email provided by Hardin, Socias replied in a straight forward manner that he will no longer be working at the District Attorney's office and that another prosecutor will be assigned the case. Socias also provide Ogg's phone number to the victim's family.

"You just don't go out and get so personal about people when you have the power to ruin their reputations, put them in jail, ruin their careers."

Outgoing District Attorney Devon Anderson wouldn't comment, only to say through a spokesperson that notifying families of a change in prosecutors is a legal requirement

Below is an email sent to outgoing First Assistant Belinda Hill from Kim Ogg addressing the controversy:

"Judge,
Please be advised that I have received several phone calls on my personal cellphone and at my law firm from a sex trafficking victim, the mother of a child who was sexually assaulted, and two parents of murdered children-all of whom have cases pending with the Harris County District Attorney's Office. These crime victims have been contacted by individuals identifying themselves as assistant district attorneys. The callers deliberately misinformed the crime victims about the status and well-being of their cases, and then told them to call me personally to complain. The prosecutor identified by the sex trafficking victim is Justin Keiter.

A frantic rape victim's mother called me to say she was notified by VINE that the a defendant accused of raping her child had been released because of case dismissal by the prosecutor, Nick Socias, who had failed to contact her about the dismissal. Last night I spoke with a woman whose daughter is the victim of a capital murder. She received an anonymous phone call by a person identified as a prosecutor who not only misinformed her about the status of her case, but made false statements about me, including stating that I would never seek the death penalty in her case, currently scheduled for Feb. 2017. The prosecutor handling her case is Gretchen Flader.

The purpose of this communication is to inform Ms. Anderson and you that the use of official and confidential information available only to the prosecutors handling these cases is unethical and possibly illegal. I urge you to immediately halt the access to all official information by these prosecutors and any others engaged in these despicable actions.

Additionally, please take immediate action to ensure that all records (personal cellphone, personal and work email, etc.) from each person involved are immediately preserved so that a full investigation can be undertaken.

To say that these actions re-victimize people who have already suffered enough is an understatement. In the name of professionalism and common decency, I urge you both to take appropriate action immediately.