No bond for 2 suspects in deadly FBI kidnapping, $1M bond for third suspect 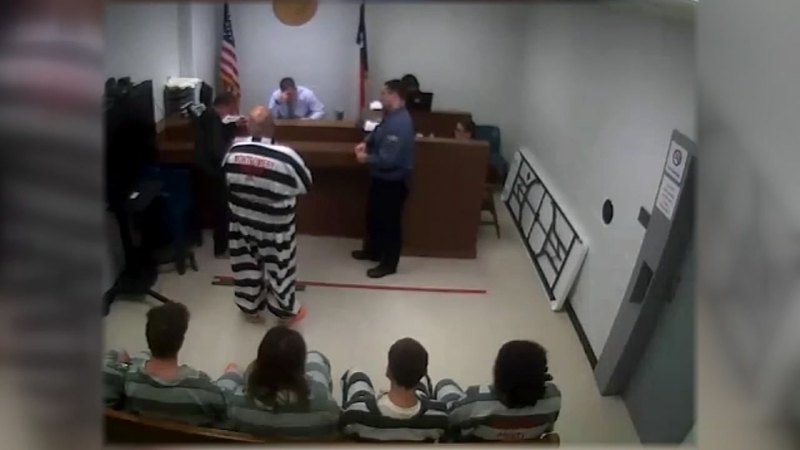 HOUSTON, Texas (KTRK) -- New information is coming in about the man killed in a botched rescue by the FBI after he was kidnapped from his home in Conroe.

Jimmy Tony Sanchez and Nicholas Chase Cunningham were booked into the Montgomery County jail on charges of aggravated kidnapping. The men and a third suspect, Sophia Perez Heath, appeared in court Friday morning.

The judge set no bond for Sanchez and Cunningham and set a $1 million bond for Heath.

In a twist revealed late Thursday, court documents show the Conroe kidnapping victim, who was killed during an FBI raid, was related to the wife of one of the suspects.

According to the probable cause documents, the victim told one of the suspects during the kidnapping that he knew his parents. It turns out Nicholas Chase Cunningham is married to the victim's cousin.

According to the criminal complaint, the suspects demanded $20,000 in ransom as the victim was held at gunpoint in a northeast Houston home. Initially, they told Ulises Valladares his brother owed them $8,000.

Furthermore, investigators alleged the suspects threatened Valladares other family members, who they could easily name because the victim is related to Cunningham by marriage. Cunningham reportedly told investigators he also had a girlfriend, who was identified as Heath, and that the victim was being held at her house in northeast Houston. Heath, Cunningham and Sanchez were arrested in the kidnapping plot.

Conroe police Chief Philip Dupuis said two suspects took Valladares with them and left the child behind. The boy later managed to get free and run to a neighbor's house where police were called.

Over the next three hours, the kidnappers called Valladares brother and made demands. Conroe police contacted the FBI for assistance in the case.

Authorities tracked down two of the three suspects through a cell phone to a hotel in Webster. The suspects were arrested.

Police were able to locate the victim to a home on Elbert Street in northeast Houston, where authorities moved in and made contact with the third remaining suspect. According to reports, an FBI agent went into the home and fired his weapon, striking Valladares.

Valladares was fatally injured and pronounced dead at LBJ Hospital. The medical examiner ruled the cause of death as "Gunshot wound of the left upper extremity with re-entry of the torso."

The FBI says two children were inside the home when the man was killed. The family came and picked up a boy and a girl.