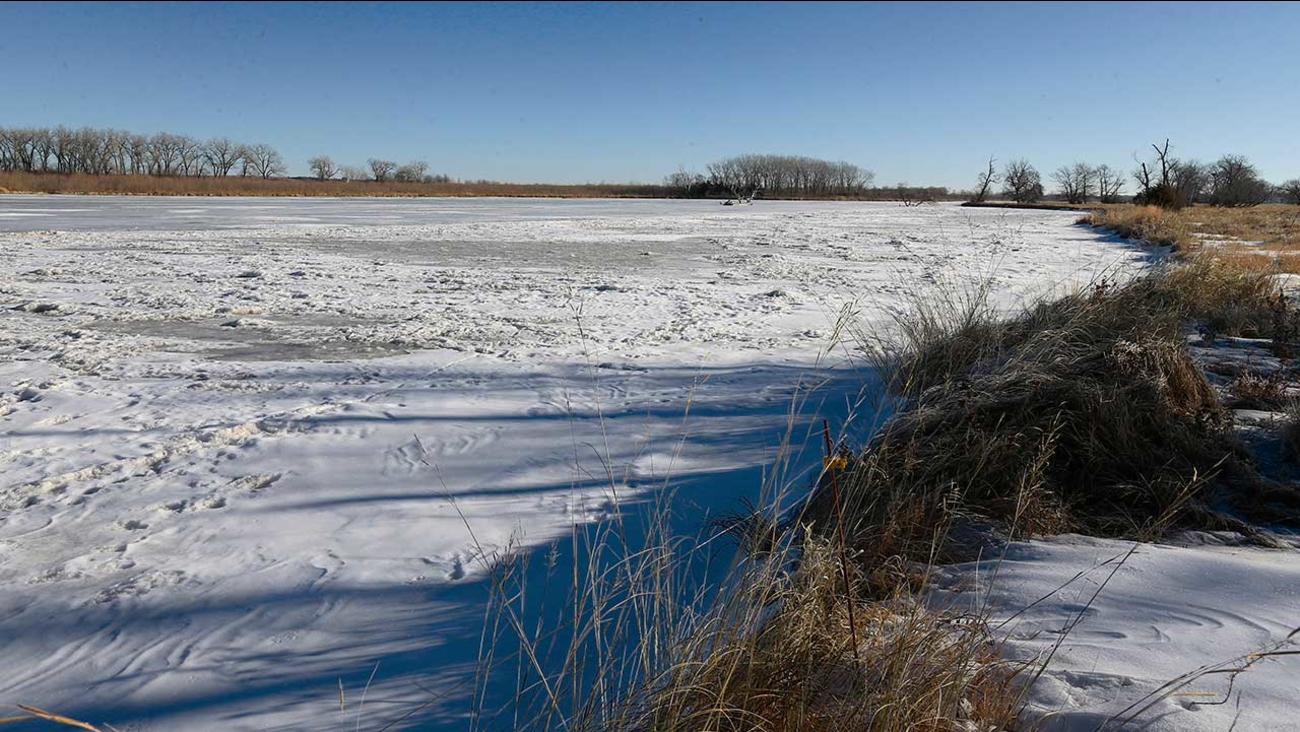 The frozen Loupe River is seen at the point where it will be crossed by the Keystone XL pipeline, near Fullerton, Neb. Friday, Jan. 16, 2015 (AP Photo/Nati Harnik)

WASHINGTON -- Defying the Republican-run Congress, President Barack Obama rejected a bill Tuesday to approve construction of the Keystone XL oil pipeline, wielding his veto power for only the third time in his presidency.

Obama offered no indication of whether he'll eventually issue a permit for the pipeline, whose construction has become a flashpoint in the U.S. debate about environmental policy and climate change. Instead, Obama sought to reassert his authority to make the decision himself, rebuffing GOP lawmakers who will control both the House and Senate for the remainder of the president's term.

"The presidential power to veto legislation is one I take seriously," Obama said in a brief notice delivered to the Senate. "But I also take seriously my responsibility to the American people."

Obama vetoed the bill in private with no fanfare, in contrast to the televised ceremony Republican leaders staged earlier this month when they signed the bill and sent it to the president. House Speaker John Boehner, R-Ohio, said Republicans were "not even close" to giving up the fight and derided the veto as a "national embarrassment."

The move sends the politically charged issue back to Congress, where Republicans haven't shown they can muster the two-thirds majority in both chambers needed to override Obama's veto. North Dakota Sen. John Hoeven, the bill's chief GOP sponsor, said Republicans are about four votes short in the Senate and need about 11 more in the House.

Although the veto is Obama's first since Republicans took control on Capitol Hill, it was not likely to be the last. GOP lawmakers are lining up legislation rolling back Obama's actions on health care, immigration and financial regulation that Obama has promised to similarly reject.

"He's looking at this as showing he still can be king of the hill, because we don't have the votes to override," Republican Sen. Jim Inhofe of Oklahoma, a vocal opponent of Obama's climate change agenda, said in an interview. "If he vetoed this, he's going to veto many others that are out there."

First proposed more than six years ago, the Keystone XL pipeline project has sat in limbo ever since, awaiting a permit required by the federal government because it would cross an international boundary. The pipeline would connect Canada's tar sands with refineries on the Texas Gulf Coast that specialize in processing heavy crude oil.

Republicans and the energy industry say the $8 billion project would create jobs, spur growth and increase America's independence from Mideast energy sources. Democrats and environmental groups have sought to make the pipeline a poster child for the type of dirty energy sources they say are exacerbating global warming.

For his part, Obama says his administration is still weighing the pipeline's merits, and he has repeatedly threatened to veto any attempts by lawmakers to make the decision for him.

Environmental groups said they were confident Obama's veto was a prelude to a full rejection of the pipeline. But TransCanada, the company proposing the pipeline, said it "remains fully committed" to building. And the Canadian government said it was not a matter of if, but when.

The GOP-controlled House passed the bill earlier in February on a 270-152 vote, following weeks of debate and tweaks in the Senate to insert language stating that climate change is real and not a hoax. Republican leaders in Congress delayed sending the bill to the White House until they returned from a weeklong recess, ensuring they would be on hand to denounce the president when he vetoed the bill.

The veto forced Republicans, still reveling in their dramatic gains in the midterm elections, to confront the limitations of being unable to turn their ideas into law without the president's consent - despite the fact they now control both chambers of Congress.

Senate Majority Leader Mitch McConnell, R-Ky., said the Senate would start the process to try to override Obama's veto by March 3. Republicans were also considering inserting Keystone into other critical legislation dealing with energy, spending or infrastructure that Obama would be less likely to veto, said Hoeven.

Obama last wielded his veto power in October 2010, nixing a relatively mundane bill dealing with recognition of documents notarized out of state. With the Keystone bill, Obama's veto count stands at just three - far fewer than most of his predecessors. Yet his veto threats have been piling up rapidly since Republicans took full control of Congress, numbering more than a dozen so far this year.

The president has said he won't approve Keystone if it's found to significantly increase U.S. emissions of carbon dioxide, the chief greenhouse gas blamed for global warming. A State Department analysis found that the tar sands would be developed one way or another, meaning construction of the pipeline wouldn't necessarily affect emissions. The Environmental Protection Agency earlier this month called for that analysis to be revisited, arguing that a drop in oil prices may have altered the equation.