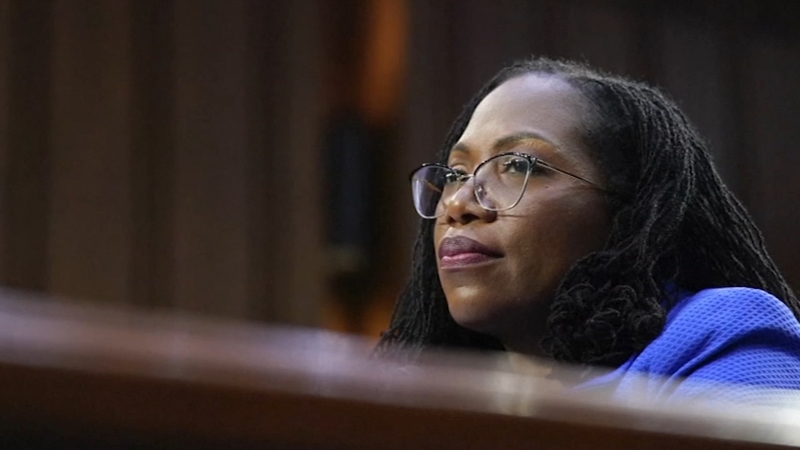 HOUSTON, Texas (KTRK) -- Thursday marked the fourth and final day of confirmation hearings for U.S. Supreme Court nominee, Judge Ketanji Brown Jackson. Although Republican lawmakers promised a fair and respectful hearing, local experts say they feel the first Black woman to be nominated to serve on the nation's highest court was not treated in that manner.

"Her credentials stand up as equal to, if not better than, the members currently sitting on the Supreme Court and those who have served historically before her,"Jefferson said.

Professor Jefferson says one of the noticeable differences in this week's hearings was the questions centered around critical race theory. Earlier this week, Senator Ted Cruz grilled Jackson about a children's book called, "Antiracist Baby." He said it was taught to students at Georgetown Day School, where she serves on the board of trustees.

"She also faced a number of questions that seemed racist, antagonistic even under bullying and she's still held up without losing her cool. Very early on in the hearing, she said that did not inform any of her opinions as a judge, and yet it was something that the senators returned to repeatedly. It began to reach a level that seemed more like bullying or perhaps just a political stunt," said professor Jefferson.

Sociology professor Tony Brown, at Rice University, says people under public scrutiny who are Black or oppose anti-Blackness, often face "loyalty tests" to determine whether they will challenge the concept of white supremacy.

"It reminds me that we are not free from the ways of discrimination. This is a representation of a moment when our society, our democracy may shift in terms of its power dynamics. There have to be these insidious tests to make sure you're either not too Black or Black enough," said professor Brown. "The nature of these kinds of microaggressions suggest some people don't see this nominee as human. I think racism is harder for people to see because it's not a cross burning or a blatant sign that says, 'Whites only.

Professor Jefferson said these SCOTUS confirmation hearings should be a venue for senators to vet nominees, but are now starting to become more about partisanship and used by politicians to get their own messages out.

"The senators have this unique moment on the public stage, especially now that these hearings are televised. They are anticipating either their re-election campaign or future aspirations to another political campaign," she said.

Profssor Brown says Jackson faced extra pressure to hold her composure, during questions she might have found frustrating, repetitive, and irrelevant.

Some Republicans continuously interrupted her during her responses or yelled during their arguments about her qualifications.

"There's a particular notion of the angry Black woman, and that is a stereotype that has constrained Black women's humanity. You cannot be yourself. You have to be who other people expect you to be," he said. "Even in that discussion of critical race theory, we saw them trying to poke the bear to get a reaction, so they could attack it."

Not every lawmaker chose to use their time questioning Jackson. Sen. Cory Booker and Sen. Alex Padilla spent a large amount of their time sharing words of support for the Supreme Court nominee, even getting her to shed a few tears.

"We don't know yet the end of the story, because of course, a vote remains. Just a year ago, she was confirmed by this very same senate for the seat she now holds on the D.C. Circuit Court of Appeals. It will be interesting to see whether or not she is confirmed with bipartisan support," said professor Jefferson. "I hope we can come together to celebrate this moment in history. It's an inspiration for the next generation to come."