Gov. Andy Beshear lamented that the number of deaths "is likely to increase."

A photo from the Kentucky flooding has gone viral, showing 98-year-old Mae Amburgey trapped in her home, sitting in 4 feet of water in her bedroom.

HINDMAN, Ky. -- After days of fatal flooding washed away parts of eastern Kentucky and the death toll climbed to at least 25, first responders worked Saturday to account for missing residents, the state's governor said.

Gov. Andy Beshear lamented that the number of deaths "is likely to increase" following what officials have described as unprecedented flooding in the region.

"To everyone in Eastern Kentucky, we are going to be there for you today and in the weeks, months and years ahead. We will get through this together," Beshear said in a tweet Saturday.

The death toll is expected to rise in the coming days as rescuers search new areas that are currently impassable.

"This is a type of flood that even an area that sees flooding has never seen in our lifetime," Beshear told CNN after returning from an aerial tour of flooding in Breathitt County on Friday. "Hundreds of homes wiped away with nothing left."

Rescue efforts have been also hindered due to power outages that persisted early Saturday with more than 18,000 homes and businesses remaining in the dark, according to PowerOutage.us.

There is no accurate account of how many people remain missing in the aftermath as cell service is out in many areas. "It's going to be very challenging to get a good number," the governor said.

Massive floodwaters washed out homes in several counties, leaving some residents scrambling to their rooftops to escape the deadly flooding. Officials believe thousands have been affected by the storms, and efforts to rebuild some areas may take years, the governor said Friday.

"It is devastating for us, especially after the western part of our state went through the worst tornado disaster we've ever seen just seven-and-a-half months ago," Beshear told CNN's Wolf Blitzer, referencing a series of tornadoes that ripped through Kentucky in December and left 74 people killed.

Deaths have been reported in Knott, Perry, Letcher and Clay counties. Fourteen people, including four children, were confirmed dead Friday afternoon in Knott County, according to the county coroner. It was not immediately clear how that number factors into the state's overall death toll.

The four children were siblings, according to their aunt Brandi Smith, who said the family's mobile home became overwhelmed with floodwaters and forced the family to rush to the roof for safety. She added that her sister, Amber, and her partner tried to save their children but were unable.

"They were holding on to them. The water got so strong, it just washed them away," Smith told CNN.

Eastern Kentucky is expected to get some relief from heavy rain Saturday. Rain is possible Sunday into Monday, when there is a slight risk of excessive rain over the region, according to the Weather Prediction Center. Affected areas may include eastern Tennessee and along the Appalachians of North Carolina, Virginia and West Virginia.

The city of Hazard in southeastern Kentucky had seven of its nine bridges impassable, an "unheard of" number, Mayor Donald "Happy" Mobelini said Friday morning.

Among the buildings wiped out include a two-story church, pastor Peter Youmans told CNN Friday.

"All that you see is scraps of cement," Youmans said of his Davidson Baptist Church, and witnessed floodwaters also wiping out a house nearby.

"It started raining so hard that it was clearly coming up into the parking lot," he told CNN's Jim Sciutto. "And then it got up into our house. That's when I knew it was really bad because it's never been in our house before. It was about a foot."

A small creek in front of Youmans' house is about 8 or 10 feet wide and normally less than 6 inches deep, but during the flooding, trailers were moving down the creek, he said.

Parishioners would typically be helping the church at a time like this, yet they are "taking care of their own problems right now," he noted.

"And some of them are in as bad or worse shape than we are in," he said. "We're just thankful that the house was not destroyed with my grandchildren in it."

Meanwhile, Joseph Palumbo in Perry County is struggling to reach his home after another house washed up onto a road on the way, blocking access.

"We walk to the end of our driveway, and there is an entire double-wide trailer smashed into our bridge," Palumbo told CNN Friday. The trailer had been across Highway 28 from his own house for decades, he said.

"I'm still sort of traumatized because never in my life have I seen something like this," Palumbo said.

And because the trailer landed on a small bridge over a creek, he and his girlfriend, Danielle Langdon, have no way of walking around it.

"We're climbing up a ladder, scaling across a tin roof, mud everywhere," Palumbo said. "The first day, we're sliding across the tin roof to get to the other side."

The resident of the destroyed home was not inside at the time of flooding and made it through the storm unharmed.

"I have friends that I haven't seen in years reaching out to me," Palumbo said. "It's really heartening to see the way people help each other."

At least 75% of Perry County had significant damages to homes and bridges, county judge Scott Alexander told CNN on Thursday.

"It's a historic storm that we have encountered, I don't think we've ever seen this much rain in a 24-hour period and it's devastated the community," Alexander said. "People lost homes, cars, it's just an unusual event." 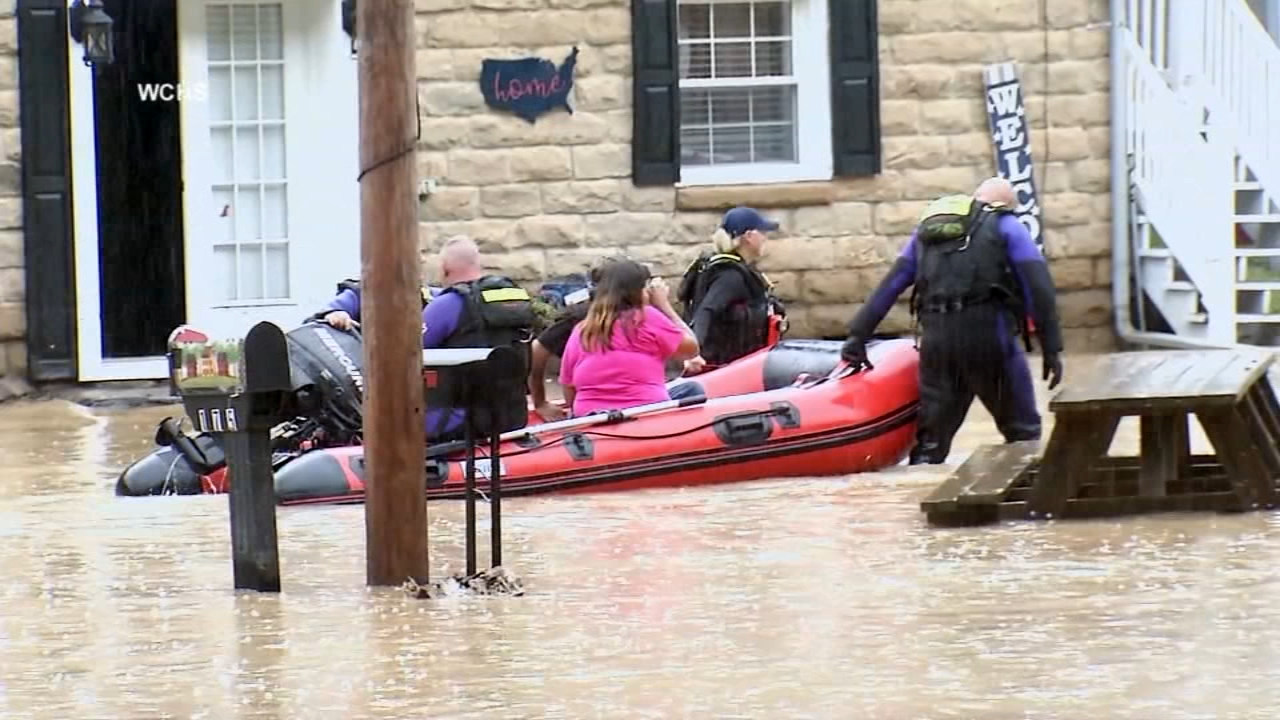