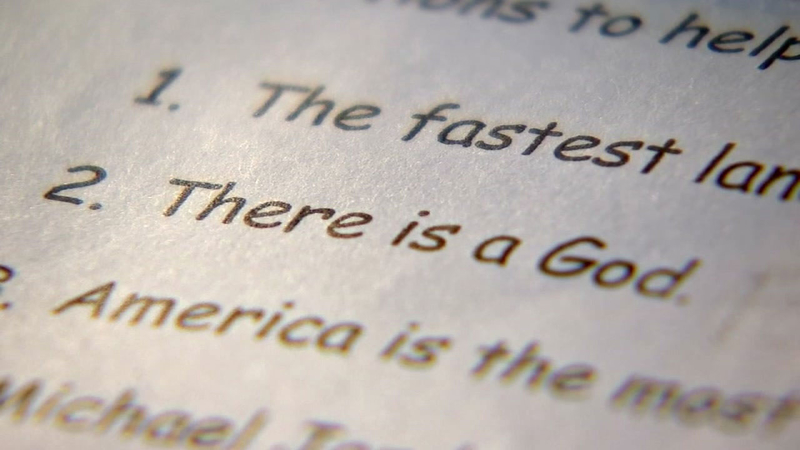 KATY, TX (KTRK) -- Katy ISD has sided with one of its teachers, following controversy over a critical thinking assignment that involved religion.

District officials told abc13 that the 12-year-old girl's story is not the same one that other students told officials. They also say that the other students claim this reading teacher did not say there was not a God during an assignment in class on Monday. The district said they interviewed eight of the 22 students who were in that same classroom.

On Monday, a reading teacher passed out a critical thinking worksheet in class. Students were instructed to pick if something was fact, opinion or common assertion. One of the statements on the worksheet read, "There is a God."

Jordan Wooley, 12, and her mother Chantel spoke in front of the Katy ISD school board to complain that the teacher told students that God is a myth and questioned his existence. Katy ISD says the teacher asked the students to participate in a school activity. They also say, the teacher explained that a commonplace assertion exists when there is room for debate.

Katy ISD Superintendent Alton Frailey said, "In the investigation those assertions were not corroborated by the other students. Was the activity graded? It was not graded. Was it 40 percent of their grade? Were the students told they had to deny God? No one corroborated that, at all."

Chantel Wooley says she stands by her daughter. She also said that somebody is telling the truth and somebody is not.

Katy ISD says the worksheet will not be used again in classrooms and that students did not get graded on that assignment. The seventh grade teacher stayed home from school today, they say, that was something she decided on her own.