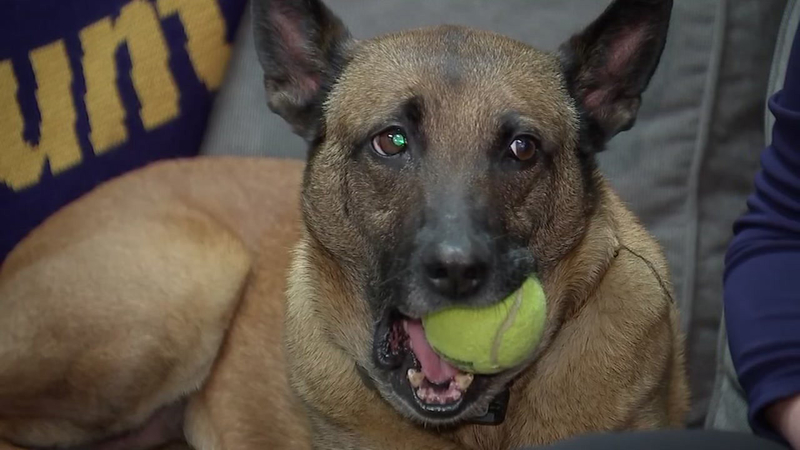 HOUSTON (KTRK) -- It was, by all accounts, a captivating demonstration for a captive crowd. In honor of Jury Appreciation Week, trained drug dogs, along with their handlers for the Harris County Sheriff's Department, on Monday demonstrated how these canines sniffed out illicit drugs.

The audience? Every member of the jury pool on that Monday morning, which happened to include defense attorney Steve Shellist. He immediately saw problems with the demonstration.

"So if somebody had a criminal case yesterday, where jurors are sitting on that panel, are chosen to decide the fate of somebody who's facing life, death, prison time, and they sat through that presentation, that's unfair," said Shellist.

The demonstration was put together by K9s4Cops, a charity group founded five years ago by Houstonian Kristi Schiller. It raises money to provide law enforcement dogs to a variety of different agencies across the country. Schiller says the charity was simply invited to tell its story.

"We're just trying to raise money to do what's right to keep our schools safe and our communities safe," said Schiller. "We certainly don't want to be vilified by the criminal defense attorneys."

The defense attorneys who voiced their concerns say they are not targeting K9s4Cops, which they note is a very worthwhile organization. However, they had a problem with District Clerk Chris Daniel inviting the group in the first place. Daniel, for his part, says he never intended to influence the jurors.

"Our point wasn't about pro law enforcement or pro defense; our point was to get people excited and make them want to come to jury duty," Daniel said. In other words, he was just trying to entertain the jurors.

The Harris County Criminal Lawyers Association says just because the plan was well meaning doesn't mean it was well thought out.

"Having a police officer, a K9 unit, come into jury assembly, gives them an insider's edge into law enforcement or how a K9 unit works, without a judge ruling if that's admissible," said HCCLA President JoAnne Musick, "it's an outside influence on jurors or perspective jurors, and jurors are supposed to be shielded from outside or undue influences."

The District Clerk said he heard from several judges and defense attorneys via phone and on social media over the last 24 hours. Although he remains insistent he had no ill intent, he got the point.

"The defense bar raised valid points, and so we're just not going to repeat this in the future," Daniel said.

No word yet on if any of the jurors on Monday heard any criminal cases that involved police dogs or K9 experts.