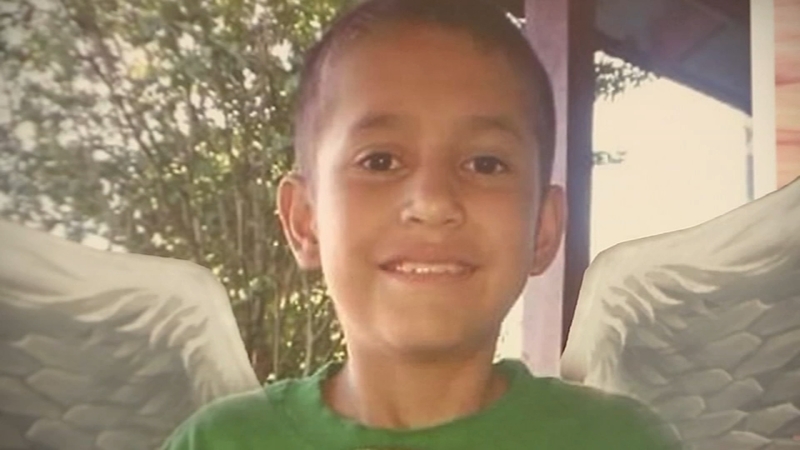 HOUSTON, Texas (KTRK) -- Andre Jackson, the man convicted of stabbing 11-year-old Josue Flores, spoke in court on Thursday after being sentenced to life in prison.

After three hours of deliberation, a jury handed down a guilty verdict. Jackson was sentenced to life in prison by judge Denise Collins.

The former U.S. Marine was arrested in June 2016 for the murder, but the district attorney's office dropped the charges for lack of evidence.

New DNA testing technology uncovered new evidence believed to be needed to re-charge Jackson in 2019. In June of that year, he was re-arrested and has been in jail on a $500,000 bond since.

The defense only called a DNA expert to the stand and recalled two of the state's witnesses. Both sides rested Monday and returned to the courtroom Tuesday to deliver closing remarks to a packed courtroom.

The jury, which consisted of seven women and five men, deliberated for three hours before handing out a guilty verdict.

Jackson, who drew criticism for his facial expressions throughout the trial, was sobbing before the jury announced the verdict. Once the verdict was announced, he was heard saying, "Oh God!" and pounding his fists on the table.

After the end of a six-year-old case, the families of Flores and Jackson were both brought to tears.

On Wednesday, Judge Collins listened to witnesses called to the stand by both parties before giving Jackson his sentence.

SEE ALSO: Both sides rest in murder trial for 2016 stabbing of middle schooler

Josue's father, Juan, spoke about how difficult the last six years have been for his family. He said they moved from their home just two blocks from the scene, so they were not constantly reminded of what happened.

"A lot was taken away from us as a family," Josue's eldest sister, Guadalupe, said. "We didn't get to say goodbye. I didn't get to give him a goodbye hug or kiss or remind him how much I loved him."

Guadalupe said she was inspired to continue pursuing a career in nursing after her brother died alone.

"I can comfort people when they are alone," she testified.

Nario and Josue would both be graduating from high school this month.

Nario described his friend as very smart and said he still has never met someone kinder than Josue.

"He motivated me to get up every day and say, 'This day is for Josue,' Nario said. "I feel like I made it up to him because we were able to serve him with this justice today, finally putting his killer behind bars. He can finally be at peace."

The defense called Jackson's stepfather, brother, and mother to the stand. They all described him similarly: very smart and caring, with a desire to take on additional responsibility. All of them said he did not have discipline issues. Family members reviewed his achievements from his time as a U.S. Marine with defense attorneys and the numerous awards he won. In the end, Jackson was honorably discharged.

His step-father, Darrell Dorsey, said they ended up being deployed together at the same time in Afghanistan. Jackson served eight months overseas. After being discharged, Jackson's mother, Michelle, said he moved in with her in Port Arthur, and she noticed a shift in his behavior that she found concerning.

"Sometimes he would be quiet, maybe in a depressed state," she said.

Michelle said she encouraged her son to get help for what she believed was anxiety or PTSD. Ultimately, the two had a falling out and no longer spoke.

Jackson moved to Houston to attend school at the University of Houston.

She found out about his arrest from a friend and said her immediate thought was, "this has to be a mistake."

In 2017, after the murder case was dismissed, Jackson moved back in with his mother and found a job. She said he appeared to be doing well.

Defense attorneys called Jackson to the stand, in what would be the first time that the court would hear from him, except for his recorded interview with police in 2016.

Jackson said that he is classified as a "high-profile" inmate and is held in maximum security on the stand. He said he is only allowed to leave his cell for an hour a day and described it as "more difficult" than the general population.

He spoke about his devout faith and said he was raised Baptist.

When asked about his accomplishments and awards earned as a marine, Jackson said, "I worked very hard."

He attended several different schools over the years and said he is 15 credits short of earning an associate's degree, something he still hopes to complete.

Jackson said his estrangement from his mother was because she kept telling him to get a job and seek help for his mental health. He said she did not understand what he was going through.

"They were accusing me and saying something was wrong with me," Jackson told his attorneys.

He said it bothered him to hear people insinuate that he struggled with a mental health disorder, calling it a "very discredited field."

Prosecutor John Jordan asked Jackson, "Did you commit this offense?"

"That's your question? No," Jackson replied.

The two went back and forth over the case facts, including where Jackson said he was going the day of the murder and if he saw something frightening that caused him to run on his way back to the Salvation Army where he was living.

He said he didn't think he could believe the citizen witnesses who saw Josue being attacked after hearing their testimonies. When asked about the DNA found on his jacket, Jackson said he thought someone intentionally placed it there or there was cross-contamination in a lab.

"Do you believe someone who stabs an 11-year-old and leaves them to die deserves a life sentence," Jordan asked Jackson.

After asking for a moment to think and if he meant with or without parole, Jackson said, "If I were a judge, I would undoubtedly give this person a healthy amount of time. I do think some people are troubled."

Jackson was asked if he told a doctor at the VA hospital in June 2014 that he feared he would "go crazy and hurt someone."

"I don't recall what I said," he responded.

Dr. John Fabian, a forensic neuropsychologist, who testified for the defense said he met with Jackson four times over five years and called the case "complicated."

During an inpatient stay at the VA, the doctor said records showed he was diagnosed with major depressive disorder with psychotic features. He said he agreed with that diagnosis.

He also believes Jackson has a paranoid personality disorder.

Fabian said Jackson suffers from auditory hallucinations and believed he was being targeted and was fearful. Jackson would not say who he thought was targeting him.

Records indicated that Jackson was prescribed medication during his time at the VA and in jail and that he was not always compliant in taking them, according to the doctor.

He said Jackson was denied PTSD disability benefits after trying to convince doctors at the VA hospital that is what he suffered. Fabian called Jackson "very psychiatrically disturbed" and said he had a dependence on marijuana and alcohol.

During closing arguments, Jackson's attorney said Josue's family got justice with the guilty conviction and asked the court to sentence him to 20 to 25 years.

Jordan said a guilty conviction without an appropriate sentence is not justice and asked the judge to sentence Jackson to life in prison. Judge Collins called the offense "so terrible" and said it was "inexplicable."

She asked Jackson if he had anything to say, and he gave a 15-minute speech from notes. In it, he said he was always prepared to lose. He called the law "arbitrary" and referred to himself as a man with a "beautiful personality" who was "rough around the edges" and does not "go along to get along."

"In the spirit of equity, everyone should get the same sentence and bond," Jackson told the judge.

Jackson said he fears he will be targeted and stabbed in prison because of his association with the case and race.

"Prison is not where I belong," Jackson said. He has maintained his innocence throughout.
"I know God will punish Josue's killer."

When addressing Josue's family, he said he did not have much to say and did not know if they believed the right person was convicted and ask if his case be reviewed.

Immediately after he finished his speech, Judge Collins announced the life sentence, and Jackson replied, "Thank you, ma'am."

Jackson waved to his family members and mouthed, "I love you," as he was escorted out.

Although, after eight days of testimony, it is still unclear what the murder weapon was. The forensic pathologist who performed Flores' autopsy said it appeared to be a small pocket knife. It was never recovered, nor was a motive revealed.

"Luckily, the law does not require a motive," Jordan said. "I think all 4 million of us in Harris County would love to know why Andre Jackson did this brutal, horrible crime because could there ever really be a reason to kill an 11-year-old child as he was walking home from school?
I think we are asking a question to which there's no answer."

Defense attorney R. Scott Shearer said he does not know if his client is guilty or not, although he does not believe he is, he said there was not enough evidence to convict him. After the verdict was read, jurors told attorneys that it came down to DNA evidence for them.

A private lab in Florida with more advanced technology than Houston had was able to find that 10% of the DNA on Jackson's jacket cuffs belonged to Josue.

"This, in our opinion, is a problem with contamination," Shearer said. "I fear for the future if this is all it takes to convict somebody of murder."