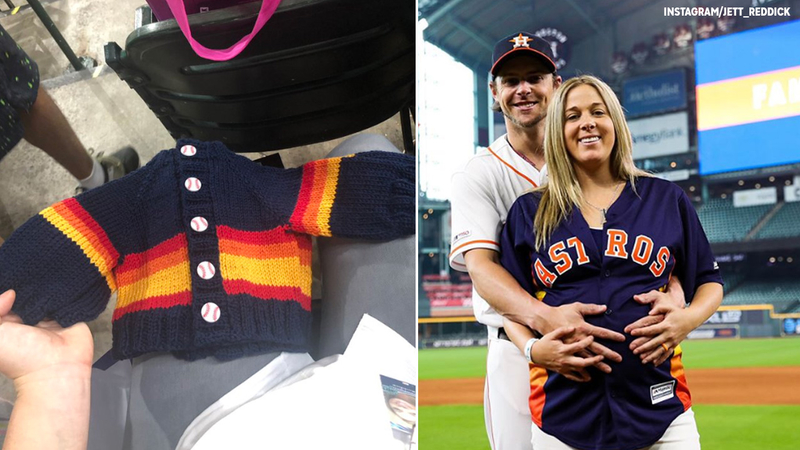 HOUSTON, Texas (KTRK) -- Houston Astros outfielder Josh Reddick and his wife Jett will already have some cozy gear to wrap their twin boys in when they arrive in October.

A fan named Carolyn created rainbow sweaters with baseball buttons for the twins, reminiscent of the coveted throwback Astros swag model Kate Upton was spotted in at games in 2017.

Upton is the wife of Astros pitcher Justin Verlander, and after she sported the sweater made by company Mitchell & Ness, it sold out.

When it is restocked, the sweater doesn't stick around long, quickly selling back out, despite a $200 price tag.

But the Reddick twins won't have to worry about that.

Jett told ABC13 Carolyn reached out to them on Twitter, saying that she too has twins and wanted to make something special for the soon-to-be parents.

Carolyn said her twins were born 18 years ago on October 22.

Thank you @almostready4it for the most adorable little sweaters for the boys! They can’t wait to cheer for daddy @RealJoshReddick in them pic.twitter.com/Oix9Wl30Iv

Jett also posted about the thoughtful gift in her Instagram story, noting the "Astros have the best fans. The cutest little hand knitted sweaters for the boys."

The Reddicks have been sharing how they're preparing for the arrival of their bundles of joy with fans.

Last month, Jett celebrated their highly-anticipated additions to their family with a superhero-themed baby shower that included Batman and Spider-Man décor.

Before that, Jett shared on Instagram that she and Josh bought Tactical Baby Gear diaper backpacks and accessories with personalized patches, which once again, feature the amazing Spider-Man.

The couple married in January at a Spider-Man themed wedding.