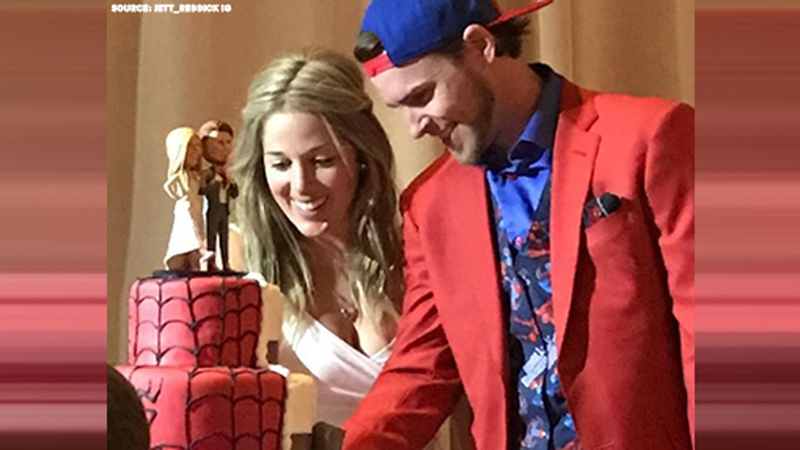 And by Spider-Man, we mean Houston Astros outfielder Josh Reddick, who is a well-documented fan of the web-slinging Marvel superhero.

RELATED: Josh Reddick dresses as Spider-Man during Astros Picnic in the Park

Josh married longtime love Georgette 'Jett' Elkins in a ceremony fit for superhero royalty at the Jekyll Island Club Resort in Georgia over the weekend.

During the affair, Reddick's Spider-Man vest peeked out of his suit coat after the couple said "I do," but if that's the only hint of Peter Parker's alias you were expecting, you'd be mistaken.

Josh and Jett also had a 4-tiered wedding cake, which featured one half of the cake in Spider-Man's iconic blue and red costume.

Although the other half of the cake looked more traditional with grey ribbon weaved through, Spider-Man still managed to find a way to make a cameo, with what appears to be a figurine peeking from underneath the ribbon on the bottom tier.

The cake topper was just as personal with miniature versions of the couple wearing red Chuck Taylors. The figure created in Josh's likeness is ripping his shirt open to reveal his Spidey garb underneath, because like any good super hero, you can't just walk around in your spandex bodysuit and mask.

But life really imitated art in the best way when Josh posed with a Spider-Man mask over his face at one point. He and his bride also wore red, blue and matching Chucks to their reception.

Fans familiar with Josh know that when his Spidey senses aren't tingling over the crime fighter, they're likely going into overdrive with dreams of entering the wrestling ring.

That's just another element he incorporated into his wedding and Mrs. Reddick appeared happy to play along.

The pair, who Josh captioned on Instagram as the new tag team champs, also made a wrestling-themed entrance to their reception.

Both of them wore robes fashioned after something that Ric Flair would wear, and of course, had wrestling belts to match.

Guests, who included Astros teammate Tony Kemp and wife, Michelle, whooped and hollered as they walked in, fists triumphantly raised to the sky.

The outfielder has displayed his love for wrestling many times on the baseball diamond, where he used Flair's entrance song as his walk-up music followed by a series of "Woo" chants from the crowd.

Josh and Jett wed about seven months months after the Astros' player popped the question at NASA.

They later took their engagement photos at Minute Maid Park.

So between traversing the Marvel universe, space and the world of wrestling, it looks like the Reddicks are well on their way.