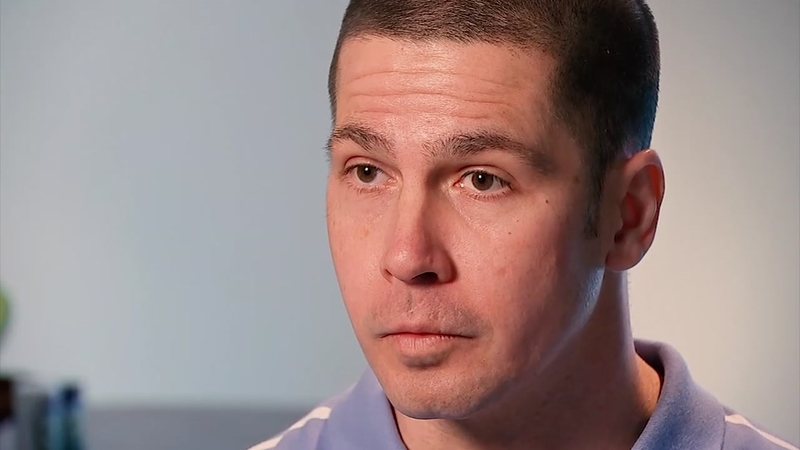 HOUSTON (KTRK) -- Six weeks after being paroled, Jon Buice is free from prison, but not free from his past.

If the name is not familiar, his crime may be. Buice pleaded guilty decades ago to the July 1991 murder of Paul Broussard in Montrose. Broussard was 27, a banker and a gay man.

At the time, the crime sparked protests by the gay community demanding swift justice against a group of teens then labeled The Woodlands 10. All 10 were eventually arrested and charged in connection with the crime. Buice was sentenced to the longest term. He freely admits he was "the guy with the knife." The nine others were released years ago.

Speaking exclusively to abc13 for the first time since his late-December release, Buice told Ted Oberg, "There's not a day I open my eyes and don't think about what happened July 3, 1991."

Decades later, he says he is still filled with "regret, guilt and shame ... you can't erase it."

The terms of his parole prevent him from reaching out to the victim's family. In our interview he wouldn't even offer a message to Broussard's mother for fear of offending her or the parole board. Through HPDs Crime Victim's Advocate, Broussard's mother declined to comment to abc13 on Buice's parole.

Buice is eager to speak with the LGBT community in Houston. Buice started that work years ago by reaching out to activist Ray Hill. In 1991, Hill led the protests to get HPD working on case; once telling a press conference, "We will catch these punks."

Since then, Buice an Hill became friends. Hill was waiting with Buice's father outside a Huntsville prison when Buice was released. Buice has reached out to other gay activists hoping to start a conversation.

"Can a person who's done something horrible be forgiven by a whole community? I don't know, we will see," he said.

Buice says he was seen as "a monster" when he went to prison at 17 years old. He says he was labeled in the media a gay-bashing, hate-crime killer. In the interview with abc13, Buice emphatically told us, "This was not a hate crime. It was a bunch of teens high and drunk in a pack mentality." In his view, "(The case) was mislabeled from the start and once the ball got trolling it was too hard to pack up."

Buice does not appear to want sympathy. He doesn't shy away from his responsibility.

"If you are involved in taking someone's life, you carry a burden on your shoulders like a lead weight. The only way to rid yourself of it or accept it as a human being is to admit it and take responsibility for your actions. It's part of growing into a man," Buice said.

Buice was released on parole on December 30. It came after nine unsuccessful tries at parole. Bowing to the intense political pressure that always followed the case, the board once revoked his parole weeks after approving it. Before the 10th vote, Buice's attorney tells us, the parole board screened "The Guy With the Knife," a documentary about the case.

Attorney Bill Habern says the inconsistencies it exposed helped Buice get parole. The parole board does not discuss the reasons for votes.

In addition to reaching out to the gay community to discuss his experience, Buice seems eager to speak out about Texas' criminal justice system. He earned three college degrees while in prison and worked nearly every day and now is addressing criticisms that convicts don't deserve credit for following the rules.

"If all you do is sit around slam dominos and watch 'Days of Our Lives,' I don't think you've earned anything," Buice said. "To be known for who I am today would be something good. To be known for what I did at 17, would not be good. I want to show people there is an opportunity for a person to grow into a good human being."

He says too many young Texans are sent to prison and hopes to advocate for reform. Buice was 17 at the time of the crime.

At 41, Buice has spent more of this life behind bars than as a free man. He says he is still adjusting to life on the outside.

"I spent over two decades in prison and after spending that long, it will take a while to de-program," he said. "I still hear the door slam shut."

The hardest thing to get used to is the silence.

"It's never completely quiet in prison," he said.

Asked why he agreed to speak to us now, Buice told abc13, he "can't remain quiet," but that he sees this as "the final interview." He is ready to move on. Does he deserve a second chance we asked?

"Deserve is a very loaded word. I can only ask for it," he said.

Buice is working full time for an employer he did not want to disclose. He lives with family outside the immediate Houston area and is not allowed to even enter Harris County, according to the terms of his parole. We asked how he has introduced himself to new friends and neighbors since his release -- many of whom know or will learn of his back story -- Buice simply says, "Hello, I'm Jon."
Related topics:
ted oberg investigates
Copyright © 2022 KTRK-TV. All Rights Reserved.
TED OBERG INVESTIGATES
Harvey victim finally gets help 1,600 days after the storm
Report: 'Significant reform' needed to improve state foster system
Feds: Slow Harvey aid, left 'Houstonians without the help they needed'
More than 20K HISD students in classes without certified teacher
TOP STORIES
Texas man said it was 'time to kill' election worker, records say
Laundrie claimed responsibility for Petito's death in notebook: FBI
Bundle up! Clear and cold night ahead
Bodies of 2 men found in apparent murder-suicide, HPD says
2 shot, 1 hit in head during home invasion on Houston's East End
Driver plows into hydrant, leading to NW Houston main break
Is is too late for the Ike Dike to be built?
Show More
Missing woman's cold case solved after car pulled from Brazos River
US confirmed 1st COVID case 2 years ago today
Police looking for 28-year-old in connection with teen's abduction
High school student attacked in his family's driveway in Richmond
Louie Anderson, Emmy-winning comedian, dies at 68
More TOP STORIES News