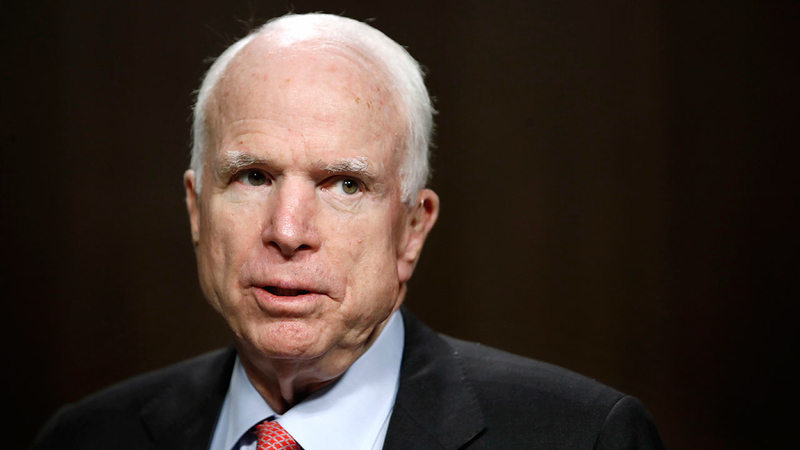 The senator was diagnosed with aggressive glioblastoma, a form of brain cancer, last year.

The family released the following statement about his health on Friday:
"Last summer, Senator John McCain shared with Americans the news our family already knew: he had been diagnosed with an aggressive glioblastoma, and the prognosis was serious. In the year since, John has surpassed expectations for his survival. But the progress of disease and the inexorable advance of age render their verdict. With his usual strength of will, he has now chosen to discontinue medical treatment. Our family is immensely grateful for the support and kindness of all his caregivers over the last year, and for the continuing outpouring of concern and affection from John's many friends and associates, and the many thousands of people who are keeping him in their prayers. God bless and thank you all."

McCain, 81, has been representing Arizona for six terms. Since December he has been away from the Capitol.

The entire conversation between Jim Gardner and Sen. John McCain. They are joined later by former V.P. Joe Biden.

Last summer, McCain flew to Washington to cast a pivotal vote against the Republicans' plan to repeal the Affordable Care Act. The vote, along with McCain's impassioned speech on the Senate floor, came just days after he had surgery.

His daughter, Meghan McCain, spoke in May about that decision to travel on The View, on which she is a co-host. She said that doctors advised against the flight because "basically your brain could explode if you get on a plane this soon after brain surgery."

Following Friday's announcement, McCain's family tweeted their thanks for all the support.

His wife, Cindy, said, "God bless everyone who has cared for my husband along this journey."

I love my husband with all of my heart. God bless everyone who has cared for my husband along this journey. pic.twitter.com/v27sEbboii

Meghan said of the family's supporters, "We could not have made it this far without you."

My family is deeply appreciative of all the love and generosity you have shown us during this past year. Thank you for all your continued support and prayers. We could not have made it this far without you - you've given us strength to carry on. pic.twitter.com/KuAQSASoa7