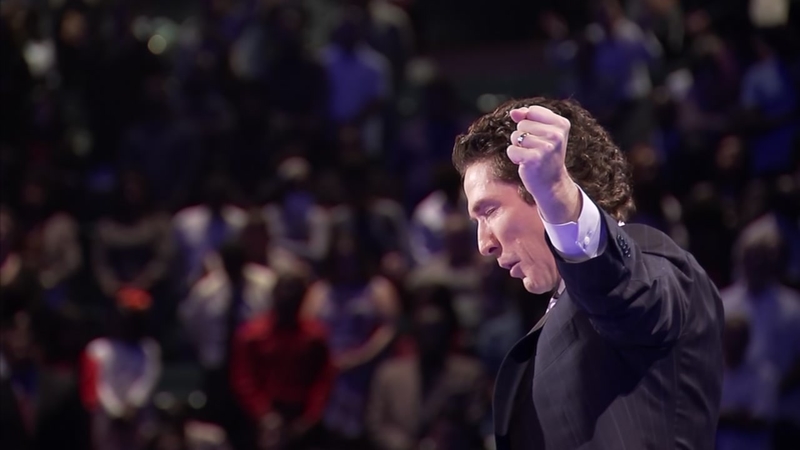 HOUSTON (KTRK) -- We spent a recent Sunday with the man who's been called America's Pastor. While our cameras followed Joel Osteen through Lakewood Church, we heard account after account of how the man who never wanted to be a preacher is changing lives with his words. It's a heavy cross to bear, so we had to ask how he feels about the job.

His followers outnumber his foes, and they come from far and wide. On this day, a woman from Nigeria approaches to shake Osteen's hand.

Sixteen-thousand people fit in his Houston house of God. Another seven-million Americans tune in for his weekly sermon on TV.

Osteen has also penned six New York Times bestsellers. The most recent one, this year. It's those words that draw people in and some say even saved their life.

Cindy Lys and her family lost their home in hard times.

"I would have wallowed in self-pity. Probably would have ended up divorced, broken," she said.

Kammie Davis suffered an unexplained illness three years ago that left her with uncontrollable pain and anxiety.

"I was just terrified. I didn't know what was going on with me," she remembers.

Doctors eventually diagnosed her with Lyme Disease, but she says it's Osteen who got her through.

For some, he's the closest they can get to God. We asked Osteen how that feels.

"At first it was very uncomfortable, now it feels rewarding -- sometimes it's just reminding people of something they maybe knew at one time, that God's got a plan. I just feel blessed to be able to lift people back up," he said.