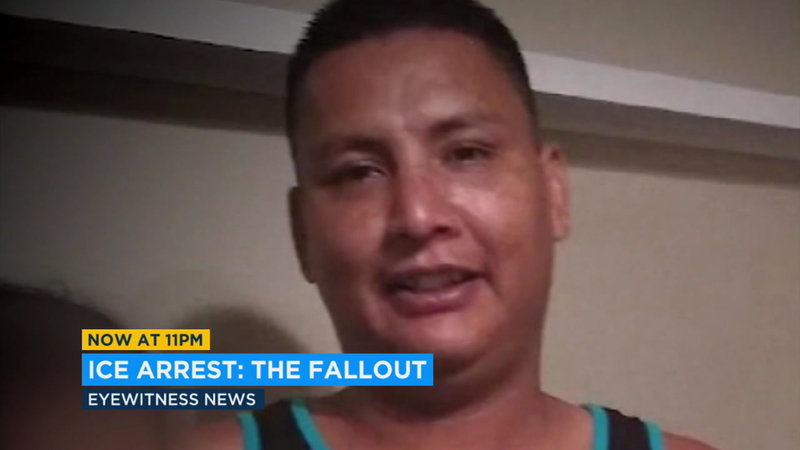 SAN BERNARDINO, California -- New questions are being raised about the arrest of a man by ICE agents as he was taking his pregnant wife to the hospital for a C-section.

The incident was caught on surveillance video at the San Bernardino gas station, which showed ICE agents surrounding the couple's minivan as they pulled into the business. The couple were asked to provide identification and when 36-year-old Joel Arrona-Lara could not provide his, agents took him into custody.

Lara's wife, Maria del Carmen Venegas, is seen in tears as her husband is taken away.

After his arrest, she had to drive herself to the hospital. She gave birth to a baby boy.

ICE agents initially said he was arrested for being in the country illegally. It wasn't until hours later, amid public backlash, they said he was wanted in Mexico for murder.

A man driving his pregnant wife to the hospital for a scheduled C-section was arrested in San Bernardino by ICE agents who said he is wanted in Mexico on homicide charges.

His family, though, says Arrona-Lara is a good man who has never been in trouble and they believe ICE may have the wrong man.

In addition to the newborn, the couple has four other children. She said she is worried about what could happen because her husband is the sole provider for the family.

His family is holding out hope for the best as their attorney works to get him free on bail so he can see his newborn son.

"I'm very confident he's going to come out because I know my dad and I know he's a very good guy," said the couple's oldest son, Cristo.

Arrona-Lara has been in the U.S. for 12 years, but is undocumented.

Law enforcement expert Steve Gomez said the time and place of an arrest is important.