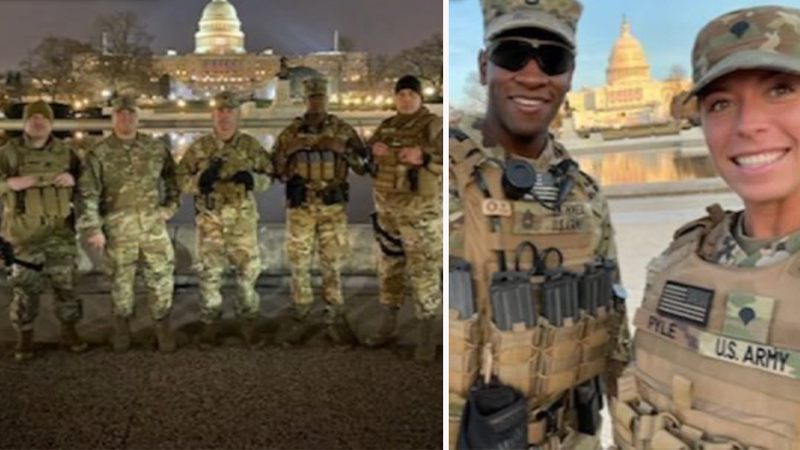 WASHINGTON (KTRK) -- In an unprecedented move in our nation's history, there are now 25,000 National Guard soldiers in D.C. for president-elect Joe Biden's inauguration. That's the most-ever for a presidential inauguration.

ABC13 spoke with a National Guard soldier to find out what the experience is like for those called to protect our nation's capital.

"It's a little surreal that we are close to this building with weapons, working with and alongside Capitol police, D.C. Metro police, and then other states' national guard," Delaware National Guard soldier SFC Julian Skinner said. "It's a little surreal, and I am sure we will all look back months and years from now and say, 'Wow we did that.'"

By comparison, in 2017 there were 8,000 National Guard troops deployed to D.C. for President Donald Trump's inauguration. That's 17,000 less than Biden will have present on January 20.

Derick Waller has more on the preparations from Lower Manhattan.

Skinner says his men were activated last Thursday and were pulling their first shift guarding the Capitol less than 24 hours later.

He says information is constantly changing and being shared between companies, Capitol police and D.C. Metro police, who are all working together to pull perimeter security.

As of now, he says things are quiet due to the curfew put on the city, and he hopes it stays that way.

In total, 21 states have sent soldiers to provide protection and support.

Joe Biden's inauguration: Everything to know about date, time, performers and how to watch live

Every president of the United States has recited the oath of office as the official start of their presidency. Here's the full 35-word oath plus the addition reportedly first made by George Washington.

Several states have posted online asking people not to send donations for the troops to the Capitol.

While they say the kindness is appreciated, they don't have enough man power to collect, sort and distribute the donations.

Skinner says with everything going on, it's nice to hear people are still showing support for the soldiers there to do a job they were called up for.