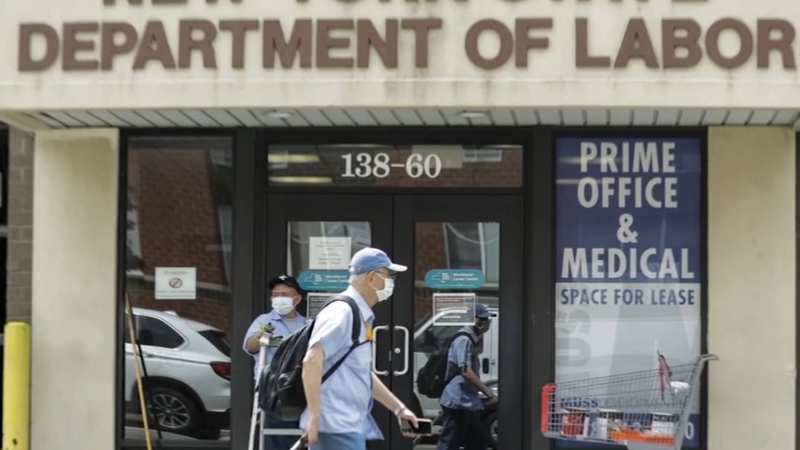 HOUSTON, Texas (KTRK) -- The latest state jobs report shows positions are back in the Houston area, but employers are struggling to get people to return to work.

The Houston area added more than 30,000 jobs in March. For job seekers like Theodis Walls, who is currently unemployed, the extra gigs are necessary.

"You want to shut down ... I understand the pandemic has made it hard to get a job, but I'm still going to keep trying," he said.

Walls has been out of work for weeks. He's been searching for a warehouse jobs, but he can't seem to get one.

"I've been getting a lot of, 'Noes' instead of a lot of 'Yeses,'" Walls recalled. Friday's job news is exactly what Walls has been waiting for.

The Houston area experienced its best March on record for new jobs - about 34,000 were created. This comes after 18,000 jobs were lost in March 2020. The biggest gains came in service industries that were allowed to fully reopen last month.

READ ALSO: Restaurant executives say 'it's a blessing' to have flourished during COVID-19

"That was huge," said Parker Harvey, the principal economist for Workforce Solutions. "Allowing businesses to go back to 100% occupancy, fully reopen, businesses that have been shut for the last year, now they're back online."

Harvey said the other aspect of the pandemic that's helping bring back jobs is the vaccine rollout. An area that hasn't improved, however, is the unemployment rate, which remains about 8%.

What's the issue? Part of the problem, according to experts, is people are choosing to stay home.

"There may be some of that going on," Harvey said. "Part of it, too, is people who have been displaced and are trying to find the right opportunity that makes sense."

That's why employers are having to offer incentives to get people back to work.

Landry's, which owns several hospitality businesses, including restaurants like Pleasure Pier and the Downtown Aquarium, not only increased starting pay, but the company is even offering a sign-on bonus.

Right now, unemployed Texans receive an extra $300, but that benefit ends in a few months. The pay might be lower at first, but Guest said over time, taking an entry-level position could be worth it.

"One of the key aspects of Landry's is we are a large company, and we have such opportunities for growth," Guest explained.

Experts said while companies are offering these incentives now, they may not be there when boosted benefits expire.

"For those who are out there looking for a job, I wouldn't rely on that too much lasting forever," Parker explained. "I would encourage you to get into the job market sooner rather than later."