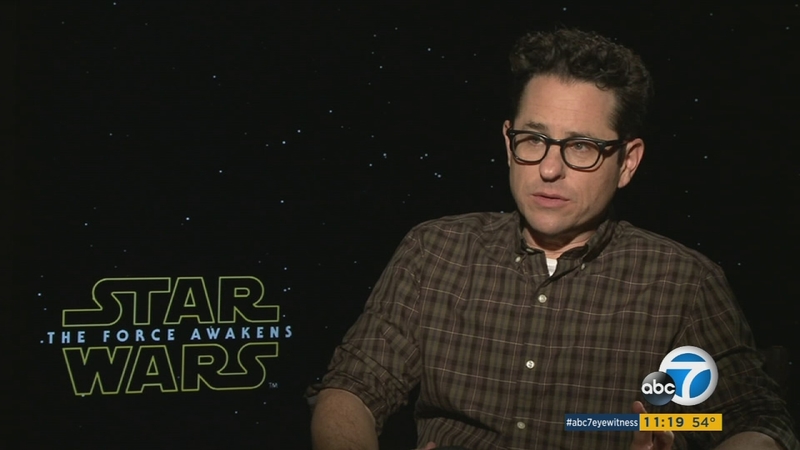 LOS ANGELES, CA -- The man behind the much anticipated "Star Wars: The Force Awakens" talks about the pressure he's feeling with the release coming up in just days.

J.J. Abrams directed, and helped write and produce the latest film in the "Star Wars" franchise.

"The pressure is undeniable and absolutely enormous," Abrams said.

"To see these people come back or show up for the first time and bring these characters to life or bring them back to life is so amazing to me. Or the design. Or the visual effects. Or the new music that John Williams has written. Or the sound effects we put in, any number of things," Abrams said. "It's the only thing that makes me feel like the opportunity is far larger than the risk."

Abrams said he understands "The Force Awakens" will be the first "Star Wars" movie for some people, especially the younger generations.

But he said those unfamiliar with the franchise can still enjoy the film without seeing the other movies in the series.

Abrams said he hopes to captivate the audience like he was when he saw the original "Star Wars." At the time of its release, Abrams was just 11 years old.

"It wasn't just the visual effects or the adventure of it, which was huge. It was the comedy of it, how funny it was, the big heart, the sense of optimism and hope," Abrams said. "It was an empowering profound thing."

Until the premiere, Abrams has kept "The Force Awakens" under tight wraps and said he discovered fans appreciated not knowing a thing.

"There's a plug-in for the Google Chrome browser that prevents 'Star Wars' spoilers. Like people are actually writing code to prevent spoiling the movie. I'm glad that some people don't want to know everything before the movie comes out," Abrams said.

"What I hate is when I go to see a movie and I feel like the trailer told me everything. Or that I've seen an interview that has revealed literally what the plot is and then I just get to go confirm it," Abrams said.

The world premiere of "Star Wars: The Force Awakens" will take place Monday afternoon in Hollywood.