Is Jimbo Fisher the next Texas A&M head coach? 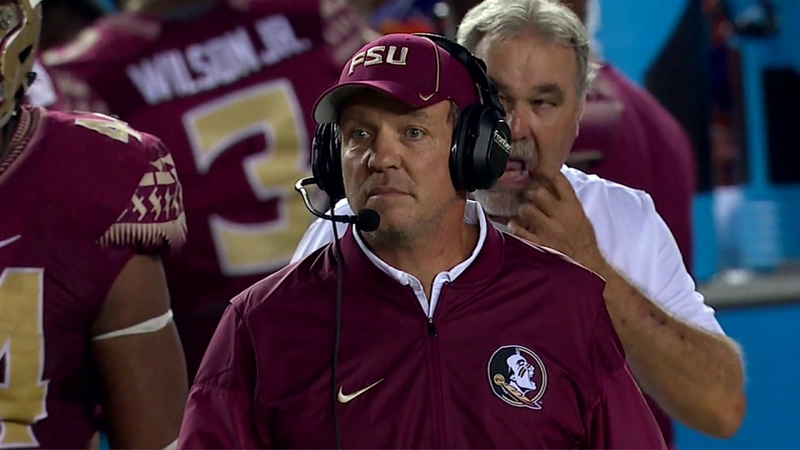 Is Jimbo Fisher the next Texas A&M head coach?

COLLEGE STATION (KTRK) -- Is Jimbo Fisher packing his bags for College Station? In the words of Lee Corso, not so fast. Aggie sources say yes, but Seminole sources say no.

Texas A&M coach Kevin Sumlin became the fifth coach in the Southeastern Conference to be fired this year. Rumors began to swirl as to who would replace Sumlin and many sources say it's almost a done deal and that Jimbo Fisher will be the next head coach for the Aggies.

However, a senior Florida State University administrator told the Tallahassee Democrat that FSU President John Thrasher had talked with Fisher Sunday and "as far as we know, no offer has been made by Texas A&M, and Jimbo Fisher is still our coach."

College Coaching searches are always so much fun.Tallahassee Democrat is reporting that Florida St President John Thrasher talked with the Seminoles’ Head Coach Jimbo Fisher Sunday and “as far as we know, no offer has been made by Texas A&M, and Jimbo Fisher is still our coach.”

If Fisher does announce his departure, it will come as a shock to not only the fans, but also the administration at Florida State.

Many college football fans are scratching their heads at the news. While the Seminoles had a disappointing season with a 5-6 record, the program still ranks among the top for recruiting. Fisher has built a dynasty in Tallahassee.

As far as terms of deal to get Jimbo Fisher out of FSU #Aggies offer described as "enormous." Expect more than a 5 year commitment. #abc13

Why would he leave? Texas A&M sources say this is why they hired Scott Woodward and everything is in place from top to bottom. Fisher has a standing relationship with Woodward and Aggie sources say they are ready with facilities and commitment that matches nation's elite. Many postulate that Fisher's interest in Texas A&M stems from Florida State not being able to make the same promises.

As far as Fisher to A&M being done one source tells me it's done when he's signed the contract and is getting introduced at A&M. #Aggies #abc13

Fisher has been at the forefront of coaching rumors before. Last year, many outlets reported that Fisher was leaving for LSU. A rumor that later proved to be untrue.