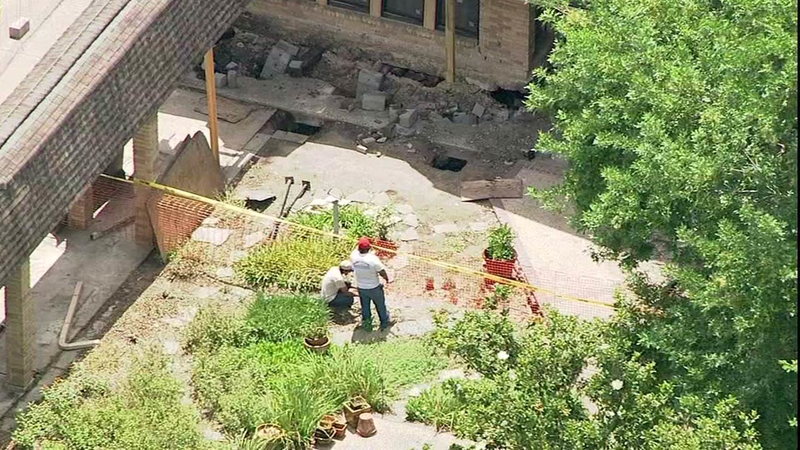 JERSEY VILLAGE, Texas (KTRK) -- The Wagners lived in their beautiful Jersey Village home for 38 years. Part of the home collapsed while workers were doing construction.

"It's the house (my children) were in from when they were little. It's just a house on the lake and it was a very, very pleasant place to live," said homeowner David Wagner.

Their home was flooded in the 2016 Tax Day Flood. They had just done a $200,000 remodel on the home and had hired a foundation company to raise the home above flood stage.

As crews were working to elevate the home, it shifted and the house dropped down. One employee suffered minor injuries and was treated. No one else was hurt and the Wagners were not home at the time.

"It was fortunate that it wasn't worse for these guys that were lifting foundation when they heard the house giving way," said general contractor Orlando Rodriguez.

Home collapses after crews work to raise the foundation. One employee suffered minor injuries. Take a look inside @abc13houston pic.twitter.com/Y78HWPJNP8

When the home shifted, bricks fell off the house. There are cracks along the wall and part of the floor caved in.

"Things do happen. I guess neither my wife nor I were terribly shocked. We knew that was one of the risks," said Wagner.

Many others in the Jersey Village area also increased their homes' elevation after the flooding.

"We're just grateful no one was significantly injured or killed in the collapse," said Wagner.

The Wagners are staying at their ranch up north, so they do have a place to stay. They hope they are able to gather some photos and personal items from the home.

Right now, crews are working to determine if it's safe to enter the home -- which appears to be a total loss.