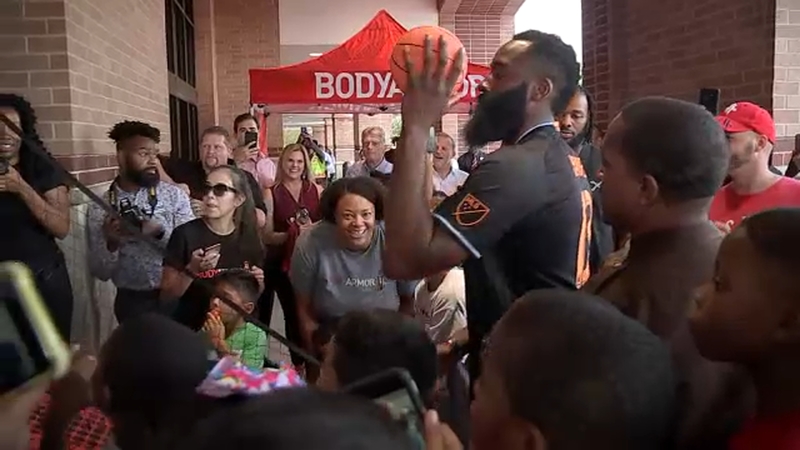 HOUSTON, Texas (KTRK) -- It won't be another month until the Houston Rockets get to hit the floor again for training camp.

So, what better time than now, and better place than the Kroger on Westheimer in the Westchase area, for the team's superstar face to make some of Houston's youngsters excited.

James Harden spent Thursday evening surprising members of a youth basketball team who thought they were taking part in a "pop-a-shot" tournament sponsored by BodyArmor, a product that the superstar endorses.

The kids completed the tournament and hung out for an hour by the time Harden, clad in his Houston Dynamo jersey, walked up to the surprise and excitement of the kids.

And with a Sharpie in his hand, No. 13 added himself to the "pop-a-shot" tourney bracket, all in good fun.

"It's all about the kids," Harden told ABC13 after greeting the young Houstonians. "It's a blessing to have so many outlets...out there to help the youth."

The kids in the tournament were able to walk away with free BodyArmor-branded prizes and, most importantly, a memory of meeting a major superstar like Harden.

Harden, who turned 30 last month, similarly surprised young under-served fans earlier in the summer at an Academy, where he gifted them pairs of his signature Adidas shoe.

ABC13's Brhe Berry was at the Academy store in Upper Kirby where James Harden give back to Houston area kids on a big week for the superstar.