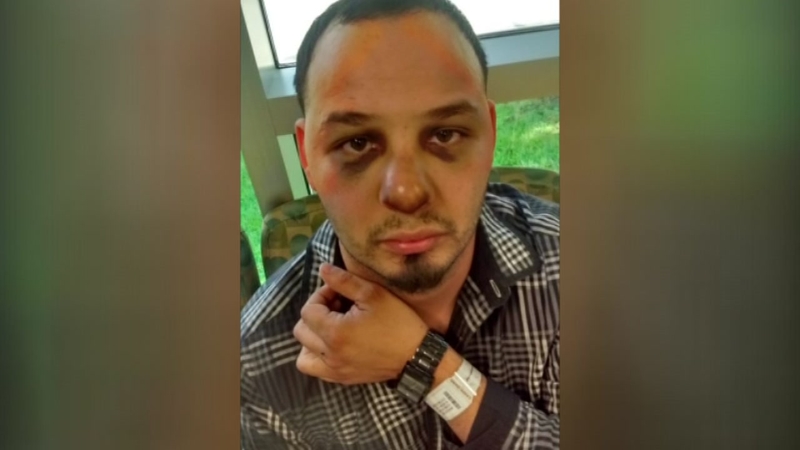 Man claims he was beaten up by jailers

HOUSTON -- A Houston man says he was beaten up by jailers because he didn't want to be strip searched in front of female inmates.

Michael Alaniz says he spent three days inside the Harris County Jail on trespassing charges after an October 24 incident.

Alaniz and his girlfriend went partying at the Extravaganza Metropolis club where he says they had too much to drink and was asked to leave. He was eventually charged with trespassing.

He says during the booking procedure, he asked the standard strip search be done away from female inmates. Instead, two jailers put him inside a holding cell and attacked him.

"They were just telling me to shut up when they were hitting me," Alaniz said.

He also says he was never given the needed medical treatment while in jail. Three days later he was released from jail. His father, a deputy constable, saw the injuries and took him to the hospital.

"We did the CT scan and they determined I had a concussion and a broken nose, and my neck was stick, and two black eyes," Alaniz said.

He has filed an internal affairs complaint, hired a lawyer and they're considering filing a federal lawsuit.

The Harris County Sheriff's Department confirms an internal affairs investigation is underway but would not comment further. Alaniz says he served his trespassing sentence, but didn't deserve the treatment.

"I stepped up to the plate and accepted what I came in there for," he added. "I want them to step up to the plate and accept what they did." he added.
TOP STORIES
6 dead, including 2 teens, in span of 10 hours on Houston roads
11-year-old girl fatally shot by father in E. Texas hunting trip
Man stabbed to death during fight outside north Houston restaurant
Innocent driver and passenger killed in crash with DWI suspect
2 people shot outside Texas City's Mainland City Centre
Fashion designer Virgil Abloh dies at 41
Texans fall to the Jets, losing the momentum of last week's big win
Show More
Cloudy Sunday with temps in the 60s
Supreme Court set to take up all-or-nothing abortion fight
Archeologists find Peruvian mummy at least 800 years old
Driver killed in fiery crash along I-69 was speeding, police say
Rare mammoth tusk found at bottom of ocean off CA coast
More TOP STORIES News