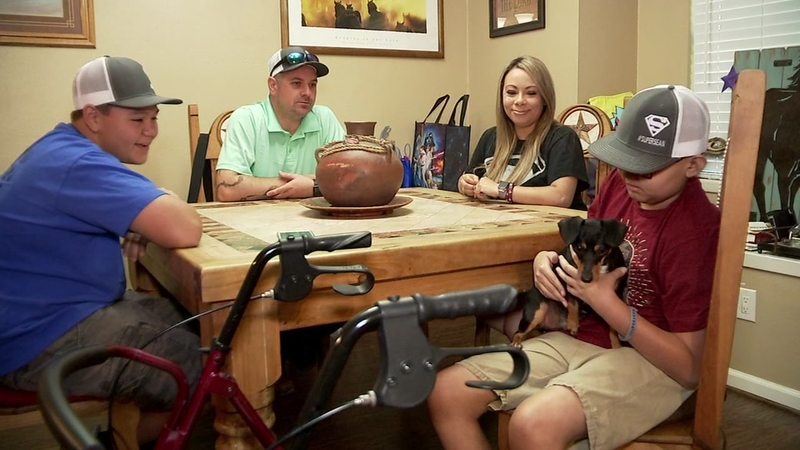 HOUSTON, Texas (KTRK) -- For Jacob Medve and Juanita Gamino Medve, their lives took a change when something was different with their son, Sean Gamino.

It all began with Sean having the flu at one month old. He was at Texas Children's Medical Center for a month to receive treatment, being completely fine and healthy after. Years later on April 10, 2018, is when Jacob and Juanita noticed something different in their son.

Sean was playing baseball outside at his grandparents house. Many noticed Sean was walking differently and not acting like the Sean they knew. As his walking began to become more unsteady, everyone kept a closer eye.

What caught everyone's attention was something that occurred while Sean and his brother, Jayden, were playing baseball. Sean went to pick up a ball on the ground, but reached in the opposite direction. With Juanita having been in the medical field for 15 years, she knew action needed to be taken.

When taken to a Memorial Hermann in Sugar Land, the doctors immediately ordered a CAT scan for Sean. Juanita was the only parent with Sean at the hospital. She called Jacob and felt it was best both were present. Once he arrived, doctors delivered the news. Jacob had a mass in his brain and would be transferred to Children's Memorial Hermann Hospital.

"It felt like someone kicked me in the stomach," Jacob said on receiving the news. He said the adrenaline rushes and many emotions run through your head. Jacob is Sean's stepfather, but says he loves him as if he is his own child.

Sean was diagnosed with brain stem glioma. Juanita said he was scared and is thankful they visited Memorial Hermann due to their work and environment.

Sean has gone through six weeks of chemotherapy, radiation and chemo pills. Juanita said Sean is doing well right now and has earned the nickname "Super Sean." The nickname originated from him wearing a Superman shirt at the hospital one day. The nurse noticed it as she was leaving and immediately came up with the nickname.

He is still using a walker as his left side is weaker. Occupational and physical therapy are being done at the hospital.

A benefit event will be held Friday. Jacob's brother-in-law reached out to him and said they wanted to do something for Sean and his family. There will be many activities to partake in, such as a bouncy house, raffle, silent and live auctions along with a DJ. It will begin at 11 a.m. on Saturday at Harvest park.

All money raised will go towards Sean's family to help them throughout the process. With having to visit M.D. Anderson Cancer Center multiple days a week for long periods of time, Jacob said all the expenses adds up. Juanita has stopped working in order to be with Sean full-time.

"Come out and just have fun," Jacob said. He said the support from everyone is what matters most.

Juanita said it has helped to see the effort put in by all employees at the hospital.