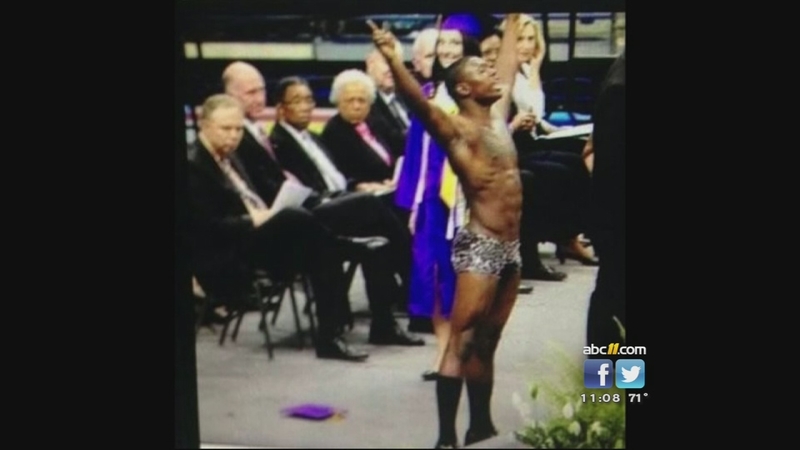 FAYETTEVILLE, NC -- A Raleigh, North Carolina, graduate is speaking out about a striptease that cost him his diploma.

Quintin Murphy, however, said the stunt was not a prank, but a demonstration.

"I deeply apologize if you guys took it the wrong way," said Murphy.

Murphy told ABC-13 sister station, WTVD, he did it to draw the world's attention to the plight of Iraqi and Afghanistan veterans with PTSD. It was a protest over how he says his uncle and grandfather and other wounded war vets have been treated.

"Fayetteville does not have the best VA hospital," said Murphy. "I have been there with my uncle and grandfather, and I've see how poor things are, and like these are men that have served."

Murphy said his uncle is a wounded warrior, and he knew Quintin was going to do the striptease. He says his uncle wholeheartedly supports him.

Johnson is a disabled war vet, who was injured in Iraq. He says for the past 10 years he has battled the VA over PTSD and other medical treatments.

"I have been on morphine for 10 years," said Johnson. "It took over a year-and-a-half to get my brace, my back brace, my knee braces, and an arm brace."

Whatever his motive, Jack Britt High School officials say Murphy's stunt was inappropriate. He won't get his diploma for a couple of months, and he has been banned from all school property.

He admits his message was probably lost in the moment, but Murphy said it was worth it.

"I just want to tell them to be spontaneous, keep living," said Murphy.