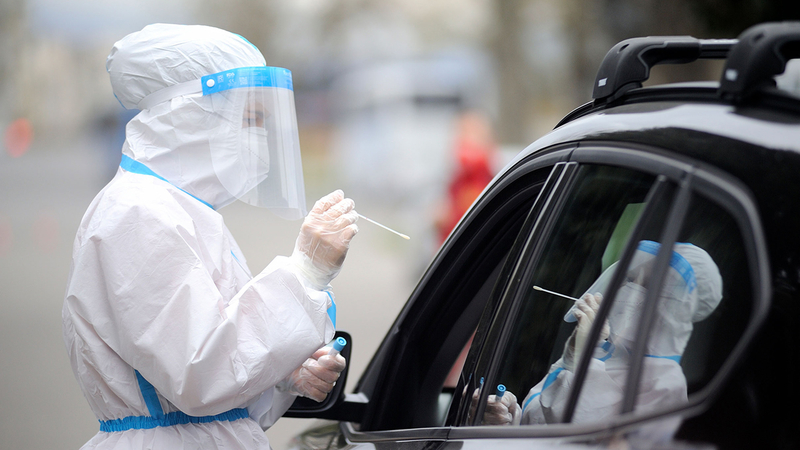 COVID cases spike in Europe; Italy braces for another lockdown

ROME -- Italy is facing another lockdown, as the government attempts to contain a recent surge of coronavirus cases, marred by the presence of new variants.

Half of Italy's 20 regions, which include the cities Rome, Milan and Venice, will be entering new coronavirus restrictions from Monday, March 15. The measures will be effective through April 6, according to a decree passed by Italian Prime Minister Mario Draghi's cabinet on Friday.

In regions demarcated as "red zones" people will be unable to leave their houses except for work or health reasons, with all non-essential shops closed. In "orange zones," people will also be banned from leaving their town and their region -- except for work or health reasons -- and bars and restaurants will only be able to do delivery and take-away service.

Affected regions will be labelled red or orange, depending on the level of contagion. Regions that report weekly COVID-19 cases of more than 250 per 100,000 residents will also automatically go into lockdown, meaning that other regions could also be affected during this time period.

The health ministry said that the aim of the measures is to get the R rate -- the number of people that one infected person will pass the virus onto -- down to 1.

The U.S. is seeing signs of progress in the fight against the COVID pandemic as vaccine rollout ramps up.

Additionally, over Easter weekend, the entire country will be considered a "red zone," and will be subject to a national lockdown from April 3 to 5.

Italian Prime Minister Mario Draghi said new coronavirus measures are "necessary" because "we are unfortunately facing a new wave of infections" one year after the start of the pandemic.

The country's R rate is now at 1.6 with coronavirus variants increasing the spread of the virus, according to the health ministry.

The variant B.1.1.7, which was first identified in the United Kingdom, is also now prevalent in the country, according to the health ministry, who also said that they are worried about the presence of small clusters of the Brazilian variant.

The UK variant was originally found to be more easily transmissible -- and new data published in the medical journal, the BMJ, supports claims from UK officials, based on preliminary data, that the variant may be more deadly, as well.

Meanwhile, the variant first reported in Brazil, known as P.1, may be up to 2.2 times more transmissible and could evade immunity from previous COVID-19 infection by up to 61%, according to a modeling study, released earlier this month by researchers in Brazil and the UK.

Speaking at a vaccination center at Rome's Fiumicino airport on Friday, the PM said he understands the toll that lockdowns take on society, but the upcoming measures were a necessary step to ensure the situation didn't further deteriorate.

"I am aware that today's measures will have consequences on children's education, on the economy and also on the psychological state of us all," Draghi said.

Italy was under a national lockdown from March to May 2020, however there have been many localized lockdowns in regions across Italy since.

A long road ahead

In the past week, there have been 150,175 new coronavirus infections, up nearly 15% from the previous week, according to Draghi.

On Thursday alone Italy reported more than 25,000 new daily cases. That was its highest record since November -- and it jumped to over 26,000 cases on Friday.

The last two weeks have also seen an additional 5,000 people in hospital with COVID-19, with the number in intensive care increasing by more than 650, he said.

In tandem with the lockdown, the PM also promised to accelerate the country's vaccination program, even as Italy banned the use of vaccines from a specific batch of AstraZeneca doses following the death of a serviceman in Sicily, who had died of cardiac arrest one day after receiving his first dose of the vaccine.

Draghi said the Italian Medicines Agency's (AIFA) suspension of that specific AstraZeneca batch was "a precautionary decision, in line with what has been done in other European countries."

From March 14, 2020: What better time for the "Macarena" than a nationwide lockdown for a global pandemic?

The European Union's medicines regulator, the EMA, is currently investigating whether the shot could be linked to a number of reports of blood clots.

Draghi added that "the opinion of AIFA, shared by scientists, is that there is no evidence that these events are related to the administration of the vaccine," he added.

Meanwhile, some European nations have completely paused their AstraZeneca rollout while the EMA investigation continues. The European drugs regulator said the benefits of the AstraZeneca vaccine outweigh the risks, and did not recommend suspending use.

"There is currently no indication that vaccination has caused these conditions, which are not listed as side effects with this vaccine," the EMA said in a statement on Thursday.

"Whatever the final decision of the EMA, I can assure you that the vaccination campaign will continue with renewed intensity," Draghi continued.

On Saturday, Italy's new COVID-19 commissioner Paolo Figliuolo said, "By this summer, all Italian adults will be vaccinated," noting that the Johnson and Johnson vaccine, which is expected to be the next coronavirus vaccine authorized by the EU, will be "decisive."

Only 3.08% (1,861,852 people) of Italy's eligible population has been fully vaccinated so far, with 6,219,849 doses administered, according to the latest data from Johns Hopkins University (JHU).