iPhone screen shatters after being hit by bullet during armed robbery 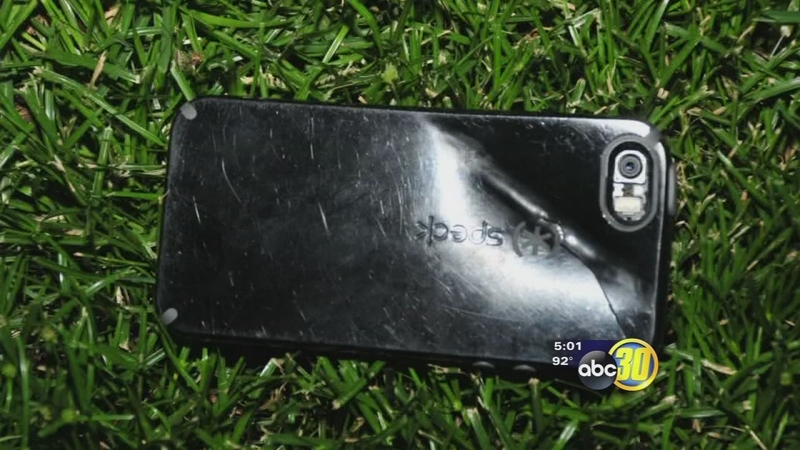 FRESNO, CA -- Fresno State is reassuring and reminding students about safety, two days after a student was robbed across the street from Bulldog Stadium at an apartment complex. The university is offering counseling to the victim in this case. The suspect got away with his laptop computer, after a very frightening encounter.

In the video, you can see the bullet marks on the iPhone case that shattered the screen, but saved a Fresno State student Monday night from taking a bullet to his leg. On campus Wednesday, word spread to many students about what happened at the Campus Edge Apartments on Bulldog and Ninth after Fresno police say an armed man followed a student home.

Joe Gomez with the Fresno Police Department said, "He had a ski mask on. He approached the victim as he was walking from the rear. He grabbed his computer- tried to pull it away from the victim. Victim held onto it- wouldn't let him take it, the next thing you know the suspect had a gun."

One shot was fired that ricocheted off the iPhone and ripped the student's jeans. The violence has some students taking extra precautions.

Fresno State student Mariana Dorsey said, "Just on the corner of bulldog, that's what scares me a little bit. I hear a lot of gangs and stuff are down there and people walking around."

Fresno State student Jonisha Damon said, "I feel like, you know, we need to get the word out there that we need be cautious out there. I feel like it's not just this area, it's all around the school."

Frank Lamas, the vice president of student affairs says the university is reaching out to this victim to help him in any way possible.

Lamas explained, "We want to do everything we can to support the student so that, even though we can't take back they went through a traumatic situation, that there's a safety net, there's people who care."

Students have also been warned about the importance of being safe through social media, staff members and the school newspaper. Fresno police say violent crime in the area known formerly as 'Sin City' is down and there have been only four robberies all year.


Related topics:
iphoneappleu.s. & worldcrimetrackerarmed robbery
Copyright © 2021 KFSN-TV. All Rights Reserved.
TOP STORIES
Arrest made in case of Alvin abduction, sexual assault of a minor
20-year-old shot to death during break-in of Conroe home, police say
Man accused of dismembering mom's body after murder appears in court
Houston Astros on pace for record beer year
Astros Game 6 guide: Closures around Minute Maid Park back on tonight
The University of St. Thomas offers low-cost counseling services
JJ Watt on Texans: 'It hurts me to see where' fan base is now
Show More
More truck drivers needed to assist with US' supply chain shortage
Don't get stuck in these traffic closures this weekend
Warrant: Baldwin didn't know weapon contained live round
Prop guns: What they are and how they can kill
4 teens accused of luring victim to his death in SE Houston
More TOP STORIES News