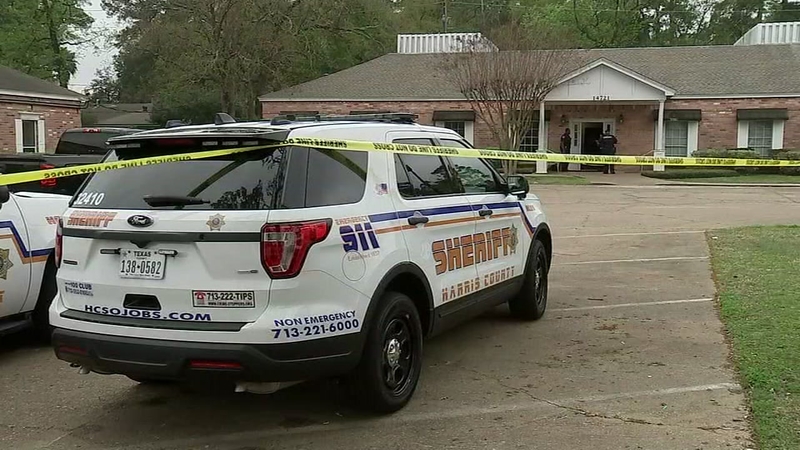 The shooting happened inside a physical therapist office in the 14700 block of Pebble Bend Drive, near FM 1960 in northwest Harris County.

Investigators say three masked men were wearing hoodies when they walked into the business around 2 p.m. Tuesday with guns drawn.

Their plan was diverted by an employee with a legal license to carry.

The woman grabbed her gun and fired a shot at the robbers.

"The suspects returned fire and in this exchange of gunfire, a patient at the business was grazed in the leg with a projectile," said Spencer.

That injured patient is expected to be okay.

Deputies say they think they found one of those suspects, who was shot by the employee, being treated for two gunshot wounds at Kingwood Hospital shortly after the shooting.

They tell us he is not cooperating and they had to release, after bringing him back to the scene of the crime for interviews.

Investigators say they are now waiting on blood analysis from the crime lab to connect the suspect to the crime.

Investigators say this is the latest hit in a growing crime list in northwest Harris County, where they say robbery crews are terrorizing the community.

"This area has experienced a significant amount of armed robberies, violent crime over the last year or so, this 1960 corridor. That's why we've devoted additional resources up here," said Spencer.

While they may have identified one of their suspects, they are still searching for the other two robbers and getaway driver, who was behind a black newer model Nissan or Hyundai with paper plates.