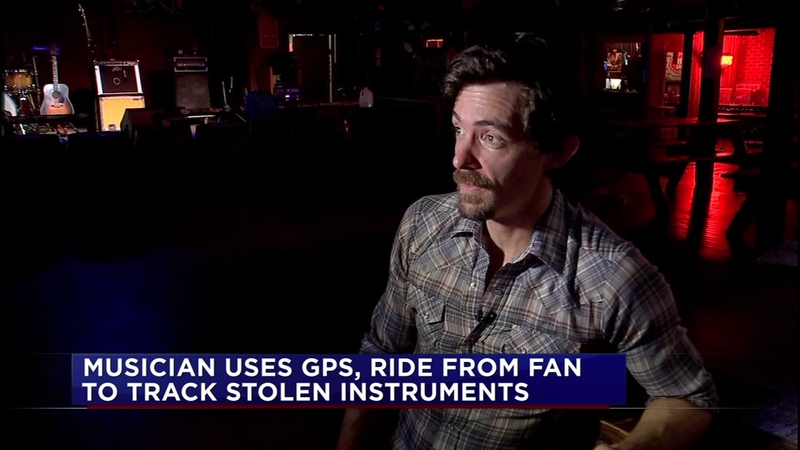 HOUSTON (KTRK) -- A Texas country music artist turned detective after thieves took off with his trailer full of his band equipment.

"When it happens, it's your whole livelihood going down the drain. It can put you out of business," said Zane Williams about the May incident.

Williams said he and his band mates were on the way to Galveston for a gig when they stopped to get some lunch at a north Houston restaurant.

"I kind of pulled around back and parked against the back fence," said Williams.

And when they finished eating, they walked towards their van, but noticed it was missing.

"Someone was like, 'Did someone move the van and trailer?' 'I didn't move it.' 'Did you move it?' 'What are you talking about?'" said Williams.

Williams said inside the trailer, nearly $100,000 worth of equipment including instruments, amplifiers and speakers were all gone.

Then, Willaims said he remembered a very important device that he purchased months ago that he installed in the trailer, a Dwalt GPS tracking device. Using his phone, he was able to see the thieves on a map heading south on I-45 toward Houston.

And then, he did was any music superstar would do, he called on the help of his Facebook fans.

"Thought it was an experience and thought I would go for it," said superfan Samantha Lindaman who just so happened to live about 15 minutes from the restaurant where Williams was left stranded.

Lindaman said she was the first fan to arrive at the restaurant. Williams got in her front seat, both drove toward the bad guys.

"I just tried to keep quiet. I did not want to stress him out any more. He was super calm for the situation he was in," said Lindaman.

About an hour later, the police were able to find Willaims' trailer and recovered most all of his equipment, except for a 100-year-old fiddle.

"We can make it easy, you can bring it back to our next show," Williams sang in a new song to the suspected thieves on his YouTube page.

According to court documents, Jose Ruiz, Roberto Trejo and Juan Gonzalez were arrested for the theft and charged with engaging in organized criminal activity.

As for Williams superfan Samantha Lindaman, she said Williams gave her a lifetime of free passes to any of his concerts.