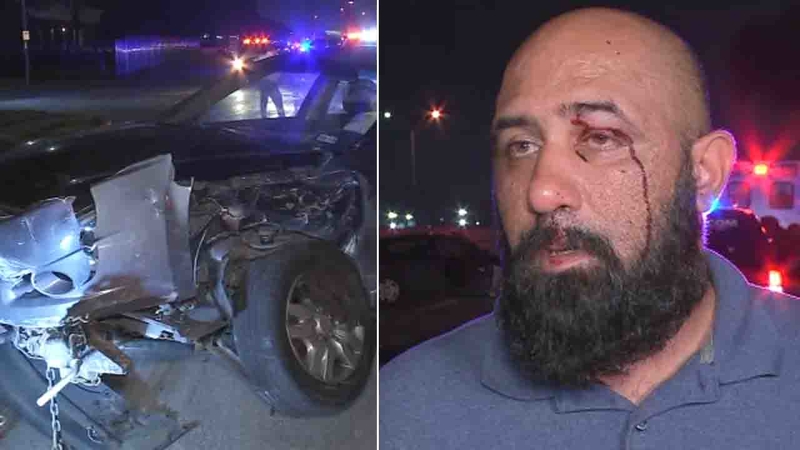 HOUSTON, Texas (KTRK) -- An innocent driver was injured when a group of teens trying to outrun police T-boned his car around 3 a.m. Friday in southwest Houston, authorities say.

Houston police told ABC13 an officer pulled over the five teens inside a gray Altima for a minor traffic violation. As the officer got out of the patrol car, the group sped off.

Police chased them to the 10000 block of Greenfork at the Beltway feeder northbound, where the suspects blew through a stop sign.

Police chase on the SW side ends with suspects slamming into an innocent driver. We are told three suspects taken away in an ambulance and a fourth is detained at the scene. pic.twitter.com/JBDiSC967b

The teens T-boned a driver in a black BMW.

The driver told ABC13 the teens, who police say are all 15 and 16 years old, came out of nowhere.

"They just came and T-boned me ... just blindsided me completely and just smashed into the car. Thankfully, I'm okay. It was just a minor cut," said Fahad Maniar.

'Just blindsided me completely.' The driver says he's okay, but his new car was wrecked.

Maniar said he was on the way back from meeting friends after work.

He saw an officer on the feeder road and slowed down, but next thing he knew, he had been hit when the chase got to Greenfork.

"I don't usually take this, but this time I happened to be here," Maniar told ABC13.

Maniar adds that he just bought the BMW and got it from the dealership Thursday.

Four of the teens were treated for injuries. At least two of them were taken to area hospitals with non-life threatening injuries.

A fifth teen spoke to police at the scene.

HFD treating one of the suspects involved in the chase that ended in a crash on the SW side pic.twitter.com/AeYffjMjaU

"I am lucky to be here basically because they were coming at a pretty high speed," said Maniar.

Houston police say they found a pair of guns in the car.