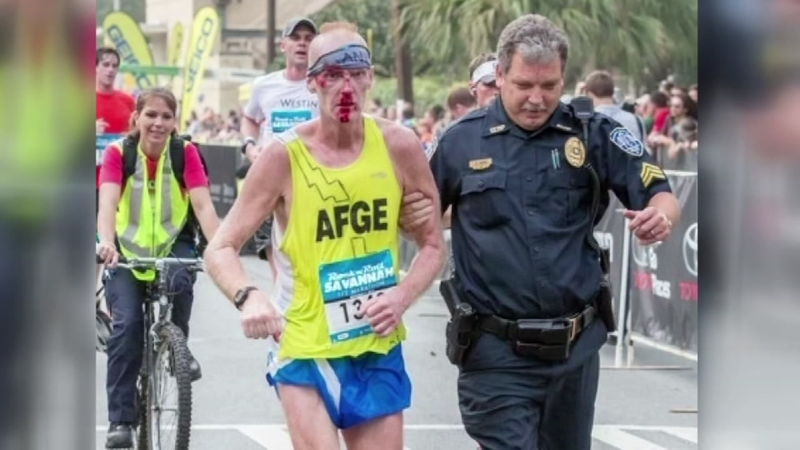 SAVANNAH, GA (KTRK) -- When half-marathon runner Robert McCoy collapsed just a half a mile from the finish line, a Savannah-Chatham Metro police officer jumped in to the race to make sure he finished.

McCoy tells WTOC-TV he signed up for the half-marathon in honor of his dad. He was so close to the finish line when his body gave out, leaving him with a bloody face and knees.

"I knew I had to get up. I knew that. I was kind of doing this for my dad. He passed in April of this year, and I was just trying to get this done for him," McCoy said.

McCoy tried to get up. He then spotted Sergeant John Cain running to his aid.

"Hearing his plea to finish that race, I knew I had to help," Cain told WTOC-TV. "I was encouraging him and telling him, 'come on, we are almost there.' He told me he wanted to run and I said 'not too fast, cause you will leave me behind.'"

"I do remember that, he kept saying, 'you got this," McCoy said.

Cain helped McCoy cross the finish line, and then the runner was swept away to the medic for treatment. Now, he's finally saying thank you by giving the police Sergeant his medal from the race.