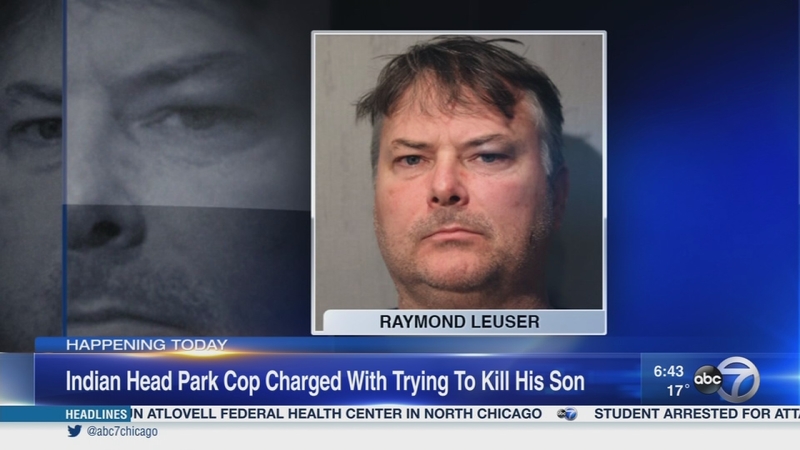 CHICAGO, Illinois -- A sergeant at the Indian Head Park Police Department will find out Thursday whether he'll be granted bond. He was charged with trying to murder his 22-year-old son.

Raymond Leuser III, 48, is the second-highest ranking member of the southwest suburban department, which he has been a part of for the last 20 years. He served as interim police chief for about a year before the current chief was hired, Indian Head Park police said in a statement Thursday.

The motive is unclear, but police said the domestic-related shooting took place at Leuser's residence in the 6200-block of South Nashville Avenue in the city's Clearing neighborhood.

Leuser was taken into custody Tuesday and was charged Wednesday attempted first-degree murder and aggravated battery/discharge of a firearm, both felonies, Chicago police said.

Indian Head Park police said the department is cooperating fully with the CPD's ongoing investigation and would have no further comment at this time.

Report a typo to the ABC13 staff
Related topics:
gun violenceu.s. & worlddomestic violence
Copyright © 2022 WLS-TV. All Rights Reserved.
TOP STORIES
Sergeant was to walk daughter down aisle until his hit-and-run death
Grab the umbrella! Widespread showers move in Monday
'We knew something big exploded': ABC13 recalls moment of Watson blast
2 adults killed and 12-year-old hurt in crash with speeding tow truck
Dad charged and fired from job after racist tirade posted on TikTok
Suspect accused of killing Pct. 5 corporal still on the run
Inside Texas hospital battling omicron: 'We're about to catch on fire'
Show More
5 tax changes that can boost your refund this year
Getting paid on Venmo or Cash App? New tax rule might apply to you
Tax filing season starts Monday. What to expect for 2022
Christina Aguilera says she 'couldn't be happier' for Britney Spears
Texas agriculture commissioner suing to stop aid for Black farmers
More TOP STORIES News