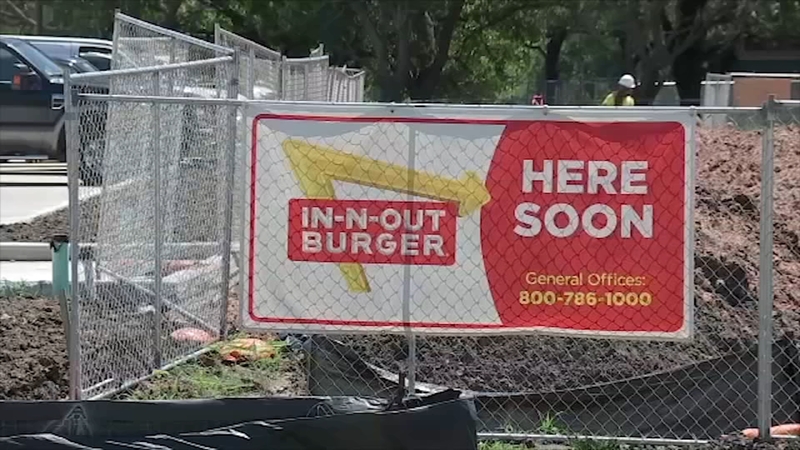 HOUSTON, Texas (KTRK) -- The wait is almost over! The Houston area is officially getting several In-N-Out Burger locations.

While Houstonians get excited, executives say the In-N-Out open dates are too close to call.

Right now, it's a race to the finish for two In-N-Out locations expected in the Houston area by the end of the year, with at least one other site waiting on a construction start date.

A 350,000 square foot retail and restaurant development in Stafford called the Grid will be home to one location of the popular burger spot.

In Katy, the restaurant will join the Y shops at Park West retail shops.

In-N-Out sent ABC13 the following statement about the progress of the new locations:

Our locations in Katy and Stafford are close to the final stages of construction, however, it is still too early to predict opening dates. At this time, we believe these 2 locations will open in the 4th quarter of this year. We have completed the acquisition of the former Chase Bank site at the southwest corner of FM 1960 and Willowbrook Mall Drive. We have not yet set a construction start date for the Willowbrook location.

We are very enthusiastic about opening our first stores in Houston, and we appreciate our customers in Houston that have shared their anticipation with us as well.

StreetLevel Investments revealed that the former Texas Instruments campus, located between W. Airport and S. Kirkwood on Hwy. 59, will be turned into a mixed-used development called The Grid.

RELATED: ABC13's Erik Barajas visits In-N-Out in California during 2017 World Series to see how it stacks up to Whataburger
EMBED More News Videos

Over in Katy, local real estate developer BPI Realty Services revealed that In-N-Out is part of the site plan for its Y Shops at Park West shopping center.

Located at 806 Katy Fort Bend Rd., the restaurant will be one component of the plaza that will also include 30,000 square feet of additional retail space.

Here's a list of reasons why Texans LOVE the iconic Whataburger.