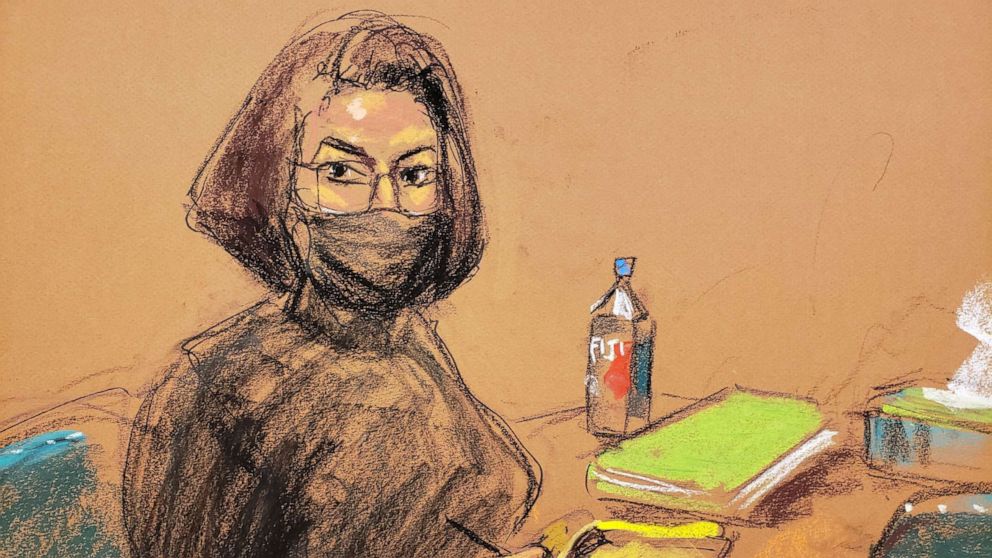 A key witness for the prosecution of Ghislaine Maxwell, identified only by her first name, Carolyn, delivered dramatic -- and sometimes tearful -- testimony on Tuesday.

Carolyn told the jury she was sexually abused for years by serial sex offender Jeffrey Epstein beginning when she was 14 years old and testified that when she first arrived at the home of Epstein's Palm Beach, Florida, estate, accompanied by a friend who promised her a way to make some extra money, it was "an older lady" with "an accent and shoulder-length hair" who greeted her at the door.

She couldn't pronounce the woman's first name, Carolyn said, so she just called her "Maxwell." The woman told Carolyn's friend to "bring her upstairs and show her what to do." Carolyn watched as her friend, Virginia Roberts, massaged Epstein for 45 minutes and then climbed on top of the table for sex. As the two girls left, Carolyn said, she gave her phone number to Maxwell and they were each paid hundreds of dollars. (Roberts, one of Maxwell's most prominent public accusers, is not expected to testify at her trial.)

Carolyn went back to Epstein's "hundreds of times" over the next several years, she said, and there was a sexual encounter each time. In the beginning, Carolyn said, Maxwell would call her to arrange the appointments, but in later years, she said, a different Epstein assistant contacted her or she called herself to try to set up an appointment.

On one occasion, Carolyn testified, Maxwell entered the massage room while Carolyn was fully nude. Maxwell touched her breasts, she said, and told her that she "had a great body for Mr. Epstein" who entered shortly thereafter. The money Carolyn received for the massages was usually left for her on a sink, but on one or two occasions, she said, Maxwell personally handed her $300.

Maxwell faces a six-count indictment for allegedly conspiring with and aiding Epstein in his sexual abuse of underage girls between 1994 and 2004. She has been held without bail since her arrest in July 2020 and has pleaded not guilty to the charges. She has denied all allegations.

Carolyn is identified in Maxwell's indictment as "Minor Victim-4." She was added to the government's case in February, seven months after the FBI arrested Maxwell at a remote estate in New Hampshire. Two of the criminal counts in the indictment, sex trafficking conspiracy and sex trafficking of a minor, are based on Carolyn's allegations.

She testified that Maxwell and Epstein both asked her to travel to his private estate in the U.S. Virgin Islands, but she said she told them her mother would never allow her to go, since she was only 15 years old.

During her testimony, Carolyn acknowledged that she became addicted to cocaine and sleeping pills and has twice been arrested for drug possession and possession of stolen property. Asked what she was doing with all the money she was making from her visits to Epstein's home, she said, emotionally, that she would "buy drugs." She also acknowledged that she recruited three other girls for Epstein, at his urging.

"He asked me if I had any friend my age or younger," Carolyn said, noting that she was 15 or 16 at the time.

During a lengthy cross-examination, Maxwell's attorneys repeatedly accused Carolyn of inconsistencies in the account she gave to the FBI in 2007 during its first investigation of Epstein and her testimony now and questioned why she failed to include Maxwell in prior civil lawsuits against Epstein, suggesting that she had a financial incentive to testify. In 2020, Carolyn submitted a claim to a compensation program funded by Epstein's estate and received an award of $2.8 million.

But when prosecutor Maurene Comey, in a brisk and pointed redirect, asked whether Carolyn's testimony was motivated by money, she broke into tears.

"Money will not ever fix what that woman did to me," she said. "Because what she did was wrong."

During the closing moments Tuesday, Carolyn also said she was 13 when she first went to Epstein's house and when she met Maxwell, which conflicts with her testimony earlier in the day that she was 14.
Report a correction or typo
Related topics:
abc newsnational
Copyright © 2022 ABC News Internet Ventures.
TOP STORIES
Deputies escort body of fallen HCSO Sgt. to funeral home
LIVE: Biden, Breyer make announcement as justice set to retire
Armed driver was trying to rob another driver on Katy Fwy, police say
These jobs are hiring, and they pay more than $14 an hour
Cool temps through the weekend with a warm-up next week
K9 stabbing suspect accused of killing father with dumbbell
No bond granted for suspect in Pct. 5 corporal ambush killing
Show More
Attorney of man questioned in dad's death wants him to seek help
HPD officer's bodycam video released in crash that killed 75-year-old
You could get paid to get your COVID vaccine or booster
World remembers Holocaust as antisemitism rises in pandemic
Notorious gangster reflects 30 years after becoming FBI informant
More TOP STORIES News