Trump impeached: How US House members from Texas voted 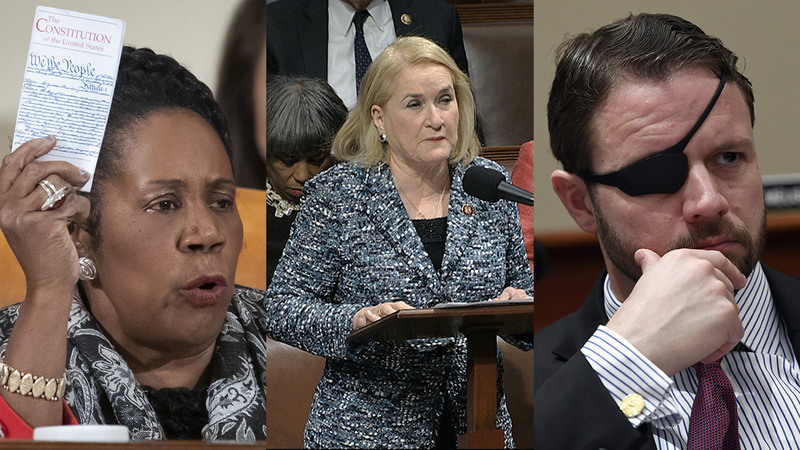 How Texas lawmakers voted on impeachment

The members of the U.S. House voted Wednesday night along party lines on two articles of impeachment against Pres. Donald Trump.

By the end of the vote, a majority of the Democratic-controlled House voted to impeach the president on charges of abuse of power and obstruction of Congress, making Pres. Trump the 3rd U.S. president in history to be impeached.

The vote came after a daylong debate over the matter in which both Democratic and GOP members gave passionate arguments to either vote in favor or against impeachment.

An interactive map below shows how representatives from Texas voted on the impeachment of the president. You can click on the photos or the map to see their vote. Texas has 36 congressional districts. Districts in RED voted AGAINST impeaching President Trump. Districts in BLUE voted FOR impeaching him.


On mobile device? Click here for a full screen experience.

As a reminder, impeachment does not mean a president is removed from office. It instead sends the matter to the U.S. Senate for a trial on the issues the House approved.

Two-thirds of US senators would have to vote to convict the president in order to remove him from office.

Select tweets by Texas U.S. House members after the impeachment

#HerestheTruth on the weakest case for impeachment this country has ever seen: pic.twitter.com/TUYFoVlnVC

Tonight, we upheld the Constitution against a President who chose tyranny over country.

His actions threatened to erode our Constitution, and we could not stand by as he continued to do so.

No one is above the law and this is why we voted to #ImpeachTrump.#IMPEACHMENTVOTE pic.twitter.com/DYaizsPVoW

This is the first time in the history of our nation that an impeachment vote has taken place with only one party's support.

In fact, this impeachment had bipartisan OPPOSITION – Republicans and Democrats joining together in a stand against Speaker Pelosi & her partisan agenda.

House Democrats just made history — for all the wrong reasons. I was glad to see bipartisan support against impeachment, and trust the Senate will reach a similar and swift conclusion to finally close the book on this sad chapter of our republic’s history. https://t.co/bI3YY6oHQ9 pic.twitter.com/9EzpmsvHa2

#ImpeachmentDay is a day to defend our democracy and protect our republic. It highlights our love of country.

We are at the crossroads of accountability. Either we hold the President accountable or be held accountable.

I was just interviewed via FaceTime w/Tom Abrahams channel 13 ABC news Houston. We talked impeachment: that scam the Democrats are doing. Maybe on tonight. (For any interested.) My Bride & I are privileged to represent the greatest district! Trump did no wrong! @realDonaldTrump

Despite unfair and, even at times, secret hearings, this impeachment investigation uncovered no evidence that the president committed impeachable offenses. This is a single-party effort in Congress to remove a sitting president. (1/2)

Historically, impeachment proceedings have been very deliberate, defined, and transparent, but this investigation was conducted in a top-secret room in the basement of the Capitol, having neither bipartisan support nor the basic norms of due process and fairness. (2/2)

What makes the impeachment vote of Pres. Trump historic? ABC13's Nick Natario breaks down the significance of the country-changing event.

Trump's impeachment does not mean he's removed from office.