911 call: Philadelphia Eagles' player tells police 'I'm about to blow his brains out' 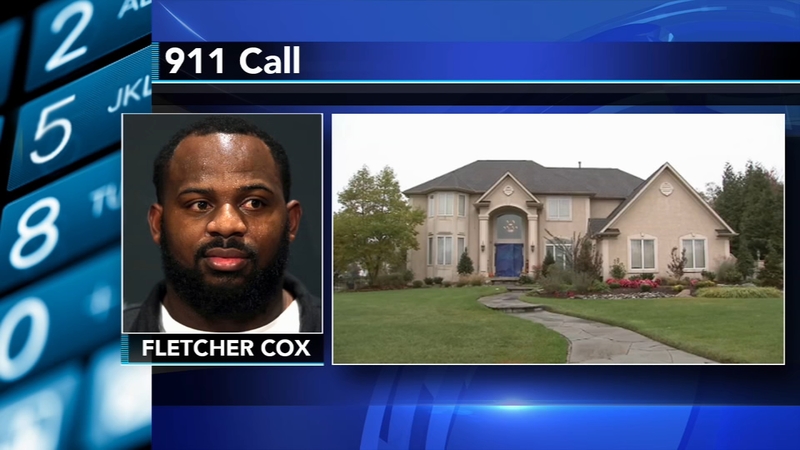 PHILADELPHIA, Pennsylvania -- WPVI-TV has obtained the 911 call made by Philadelphia Eagles defensive tackle Fletcher Cox during an alleged burglary at his Gloucester County, New Jersey home.

In the call, which you can hear below and read the transcript further down in this article, Cox told the operator he was holding a shotgun as a man was trying to break into his Mullica Hill home last week.

Action News has obtained the 911 call placed by Philadelphia Eagle Fletcher Cox during an alleged burglary at his New Jersey home.

The man, identified as Corbyn Nyemah, has been charged with burglary, criminal mischief and other related charges.

According to court records, Nyemah of Marcus Hook, Delaware County, allegedly damaged her vehicle before attempting to forcibly enter the home by throwing rocks through the front door.

Court records also reveal surveillance cameras at Cox's home capturing Nyemah walking around the exterior of the property with a baseball bat and attempting to enter the garage multiple times.

After Cox armed himself with a shotgun, he called police reporting a man attempting to break into his home.

Nyemah then fled in his Porsche SUV.

Nyemah, who posted bond, told Action News he was trying to talk with his ex-girlfriend who was inside Cox's home.

Fortunately no one was injured during the alleged break-in.

Cox has refused to discuss the incident, calling it a private matter.

Below is a transcript of the 911 call:

Fletcher Cox: (says address) I got somebody trying to break into my house and I'm about to blow his brains out right now.

(Banging noise can be heard in the background)

Operator: You in South Harris or Harrison Township?

Operator: Hold on. Let me get the police on the phone. Hold on, please.

Operator (to police): I have a 911 transfer. I got Fletcher Cox on the line. He's advised me someone's attempted to break into his house. He's armed with a shotgun.

Fletcher: (Gives address) Do you hear it?

(There is a banging noise in the background)

Fletcher: I swear, you've got about 30 seconds.

Operator: Mr. Cox, can you get somewhere where you're secure?

Fletcher: I am secure, but I have my shotgun. I swear to God, he's busting every window out of my house right now.

(More banging noises can be heard)

Police: Sir, is there anywhere you can go?

Fletcher: If he walks in my house...

(A man's yelling can be heard in the background)

Fletcher: If he walks in the house, you have to hurry up.

Police: I have officers on the way.

Fletcher: Please hurry up. Do you hear this?

Police: Sir, they're on their way. Is there any way you can lock yourself in a room?

Fletcher: I'm standing at my door if he comes into my house, I'm telling you right now. My gun is on safety and I'm going to blow his brains out.

Fletcher: Now he's outside damaging her car. I've got cameras.

Police: Do you see anybody outside, sir?

Fletcher: No, he's outside. He's getting in his car, leaving right now.

Police: He's getting in his car? What type of vehicle is he getting in?

Fletcher: What kind of car he got?

(A woman's voice can be heard saying "Black Porsche.")

Police: OK, let me know which direction he's headed in.

Police: OK, sir. Now you see him still in the driveway?

Fletcher: Yes, he's about to pull out right now.

Police: OK, let me know what direction he heads in.

Fletcher: He went out to enter the cul-de-sac to turn around.

Police: OK, which way is he going?

Fletcher: He's going up to the neighborhood. He made a right (says nearby streets).

Police: OK, I have an officer in the area. Do you have any idea who it might be?

(Fletcher asks 'what's his name' to a person in the room)

Fletcher: Corbyn is his name.

Police: Do you know what Corbyn's last name is?

Police: Ok, sir, I do have officers behind the vehicle.

Police: Sir, can you put the shotgun down? I have an officer arriving at your door now.

Fletcher: The gun is down and unloaded.

Police: OK, I have an officer arriving now. He should be at your front door.

Fletcher: Can you tell the officer I'm walking out my front door right now?

(Police chatter is heard. Then Fletcher Cox is heard meeting the officer outside his home.)