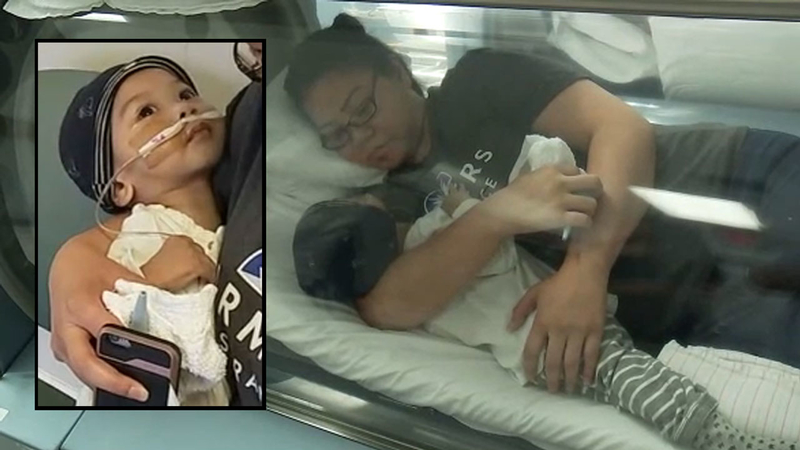 SUGAR LAND, Texas (KTRK) -- Eighteen-month-old Dylan Kim doesn't look or act like a typical toddler, but he is a survivor.

He was found face down in the Sugar Land family's pool on March 23. After weeks on life support, doctors told his parents to prepare for his last breath.

"When his breathing was really shallow, it was really quiet," his mother tells Eyewitness News. "We thought this was it, and all of a sudden he kept going."

At just 13 months, he was diagnosed with severe brain trauma from lack of oxygen and blood.

"This is a devastating injury," says Dr. Paul Harch.

Knowing Dylan may never be the same, the family searched for alternative medicine and found Dr. Harch in New Orleans - and his hyperbaric oxygen therapy.

"He's severely injured, but I felt that the chance of him improving with this is very high," Harch said.

For most of the summer, Dylan and his family relocated to New Orleans, where they've taken a chance on this non-traditional treatment.

"I figured if he's such a small kid and fighting so much every single day, then we should be there fighting next to him," his mother said. "Once we're in there, it feels like you're on an airplane. You're ears are always popping."

For the past 35 years, Dr. Harch has treated patients with varying types and degrees of injury.

His recipe is simple: air, oxygen and pressure.

"It's been known and it's well-established that if you give someone repetitive hyperbaric oxygen therapy, you will grow new tissue, you will heal wounds," Harch said.

Dr. Harch admits Dylan is not expected to recover fully. It's unlikely he will walk or talk on his own.

But the summer of treatment here has shown improvement.

"He has had an almost immediate change in his improvement curve to where he started blinking, moving his eyes, some facial expression, his tone decreased and he relaxed," Harch said.

Mom has noticed it, too.

"If you want drastic changes right there, and then you won't see it. To anyone else's eyes it's not working, but if you see the little changes and you accept that, then yes it is changing a little bit at a time."

The change may be small, but each treatment gives the family new hope that did not exist before.

"Every little thing that changes, it's a big milestone for him."

The family is now back home in Sugar Land, where baby Dylan is doing well undergoing occupational and physical therapy.

They hope to install a hyperbaric oxygen therapy chamber to continue treatment.