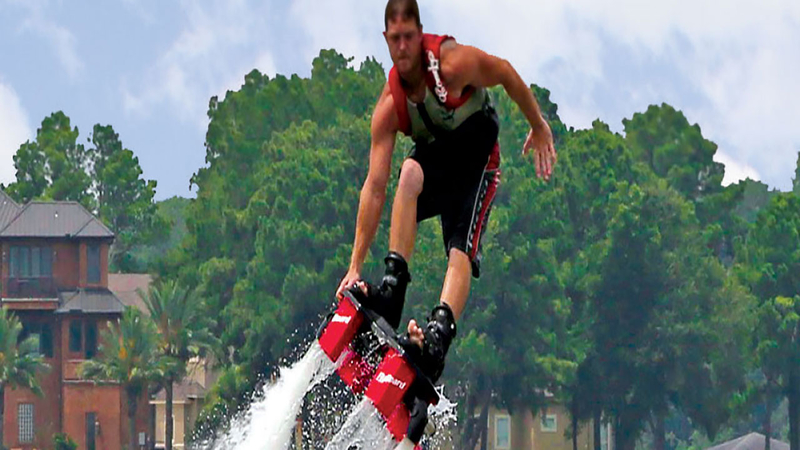 MONTGOMERY, Texas -- With a lifelong fear of heights coupled with dreams of being airborne, Ronnie Feise launched a business that combined his aspirations with his passion for teaching.

Feise opened HydroRockets on Lake Conroe in May 2013. The water sports center is the only business in the Lake Conroe area to offer hydroflight lessons year-round on a variety of devices.

"A friend of mine showed me a video on YouTube that was the very first video published by the guy who invented the first set of Jetboots, and I was immediately obsessed," Feise said.

"We offer the widest range of hydro-flight devices than any other watersport center in the U.S.," Feise said.

Similar to a Jet Ski, hydroflight devices are powered by the water that would normally propel a Jet Ski forward, Feise said. The water is diverted from the back of the device through a hose and out of the hydroflight device's nozzle.

During the flight, an instructor on the device controls the overall propulsion and instructs the rider how to maneuver the device via a waterproof Bluetooth two-way communication system. The instructor also guides the rider on how to balance, steer and safely land the device back in the water.

"The device we used in 2013 looks like something that was made by a caveman compared to what we have today," Feise said. "The jetboot devices that are offered now are much easier to learn to ride. There are also so many different devices now, which allow you to have the 'first time' thrill over and over again."

Feise said in the future, he plans to stay on the cutting edge of the hydroflight and watersport industries and continue to add new devices to the business's repertoire.

"It is a great pleasure to be able to share my passion with others and see how much fun they have learning to fly," he said. "The thought of owning a business that would allow me to live my dreams, overcome my fears and feed my passion is what drives me."